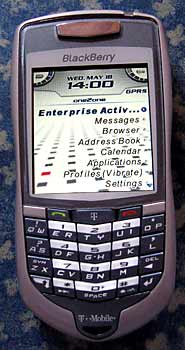 I’ve been using my new Blackberry for over a week. So far, no sign of the addictive behaviour which led people to rename it the ‘Crackberry’. The key to controlling it is to be VERY selective about which correspondents’ messages are forwarded to the device. I can imagine a forthcoming New Yorker cartoon showing a couple having a tiff and one shouts “Right! That’s it! I’m not letting you through my Blackberry filter any more!” as s/he flounces out. The pseudo-QWERTY keyboard takes a bit of getting used to after years of texting on ordinary mobiles. But the predictive software is actually very good. And it’s really nice having email and text messages presented in the same list and letting the phone sort out what to do after one clicks on ‘reply’.