We’re now at the stage where we should be getting the next wave of disruptive surprises. But – guess what? – they’re nowhere to be seen. Instead, we’re getting an endless stream of incremental changes and me-tooism. If I see one more proposal for a photo-sharing or location-based web service, anything with “app” in it, or anything that invites me to “rate” something, I’ll scream.

We’re stuck. We’re clean out of ideas. And if you want evidence of that, just look at the nauseating epidemic of patent wars that now disfigures the entire world of information technology. The first thing a start-up has to do now is to hire a patent attorney. I had a fascinating conversation recently with someone who’s good at getting the pin-ups of the industry – the bosses of Google, Facebook, Amazon et al – into one room. He recounted how at a recent such gathering, he suddenly realised that everyone present was currently suing or being sued for patent infringement by one or more of the others.

How have we got ourselves into this mess?

My Observer column for today.

At first sight it looked like an April Fools’ joke. A branch of the US intelligence service called the Intelligence Advanced Research Projects Activity (IARPA) announced that it would be pouring millions of dollars into a “Metaphor Programme”. “Perhaps it’s a red herring,” observed a colleague, entering into the spirit of the thing. But then we remembered that the US intelligence establishment doesn’t do jokes, on account of it comprising lots of smart folks whose sense of humour was surgically removed at birth. So I read on.

“The Metaphor Programme,” said the solicitation (ie call for research proposals) from IARPA’s Office of Incisive Analysis (I am not making this up), “will exploit the fact that metaphors are pervasive in everyday talk and reveal the underlying beliefs and worldviews of members of a culture. In the first phase of the two-phase programme, performers [IARPA’s intriguing term for researchers] will develop automated tools and techniques for recognising, defining and categorising linguistic metaphors associated with target concepts and found in large amounts of native-language text.”

Ah! So it’s computational linguistics on steroids. But why would US spooks suddenly develop an interest in an area that has hitherto been the preserve of humanities scholars?

Each of the £4,000 golf buggies comes complete with a sat-nav system which is programmed with a map of West Midlands Golf Club.

The hi-tech devices mean members could do away with caddies altogether as the buggies’ computers tell players how far they have hit a drive and what distance remains to the hole.

But even these capabilities do not supersede the buggies’ most important function – being able to order a drink remotely from the bar.

John Harrhy, 65, co-owner of the club in the Forest of Arden, near Solihull, explained what led him to introduce the 25-strong fleet.

He said: “We like to think we are a forward-looking golf business. We had been looking around at ways to progress and considered a number of buggy models. They are very popular with the senior members, who are offered them at a cheaper rate, and with visiting golf societies. You can enter your scorecard on the on-board machine and it knows which other buggies are in your group.’

The funny thing is that none of the players who will eagerly embrace this technology can hit the ball far enough to get lost.

Well, blow me down! The Daily Torygraph reports that:

Men find photos of the opposite sex much more “rewarding” than women, new research claims today.

According to the study men take the same pleasure out of looking at an attractive female form as they do from having a curry or making money whereas women do not take any significant reward from looking at pictures of men.

Reward centres, eh? Now that’s what I call leading-edge research. (Or should that read ‘world class’? I’m always getting the two mixed up.)

Er, you just stick it in the ground. Ideal for picnicking drinkers. $7.95 from Crate & Barrel.

If you find someone whirling his/her new Apple laptop around and are wondering why, look no further.

Thanks to Bill Thompson, whose laptop is too ancient to be serviceable in this way. Thankfully, so is mine!

En passant… I overheard a conversation recently in which people were talking about the government’s policy on so-called “Faith-based” schools. One mother said ruefully that her little darling had declared that the only faith-based establishment he was willing to attend was a Jedi school.

Later… Quentin (who has one of the fancy new MacBookPro machines) writes:

I can confirm that this works as advertised, and should be a source of concern to any companies who insure laptops :-)

Reminds me of a sign I saw once in a US petrol station….

Duct tape is like the Force
It has a light side, and a dark side
And it binds the universe together.

Lover’s Cups explore the idea of sharing feelings of drinking between two people in different places by using cups as communication interfaces of drinking. Two cups are wireless connected to each other with sip sensors and LED illumination. The Lover’s cups will glow when your lover is drinking.

When both of you are drinking at the same time, both of the Lover’s Cups glow and celebrate this virtual kiss. 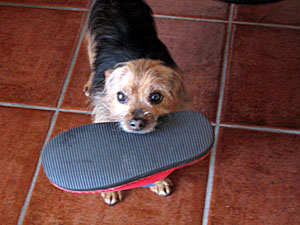 After all, everyone else has a mobile phone nowadays. But wait! — help is on its way. Due for release in March 2006, apparently. I expect the cats will want them next. Sigh.

Photo shows our good friend Rolo, who labours under the delusion that phone calls can be made with a slipper.

It’s a Yamaha EZ AG. Each fret has six illuminated microswitches which, when depressed, simulates the sound of a string being pressed at that location. If you want to learn, then the device will ‘play’ a desired riff, lighting up the relevant switches/frets as it goes. Quentin and I found it when buying audio kit at Digital Village. I left him in charge of it while I went to pay. As I was signing the credit card chit, what should I hear but the opening bars of Eric Clapton’s ‘Tears in Heaven’, played expertly.

Someone (Gordon Brown?) should give one of these to Tony Blair when he steps down from Number 10. After all, he used to be an air guitarist before he took up politics. A snip at £149.99!