Further to my reflections on getting movies from digital still cameras, here’s an example of the way the boundaries between devices is blurring. My Canon IXUS, like many compact digital cameras, has a movie mode. If you use it to record movie clips, then iPhoto neatly collects them and keeps them in its library, where they’re stored as .avi files. Double-click on a movie clip and OS X launches QuickTime player, enabling one to view the clip.

So far so good. But if you launch iMovieHD then you can drag .avi clips from the iPhoto library onto the editing timeline. The software converts them to DV on the fly. (In the old days, you had to open them in QuickTime Pro and convert them to DV files, but now it all seems to be built into iMovieHD.) 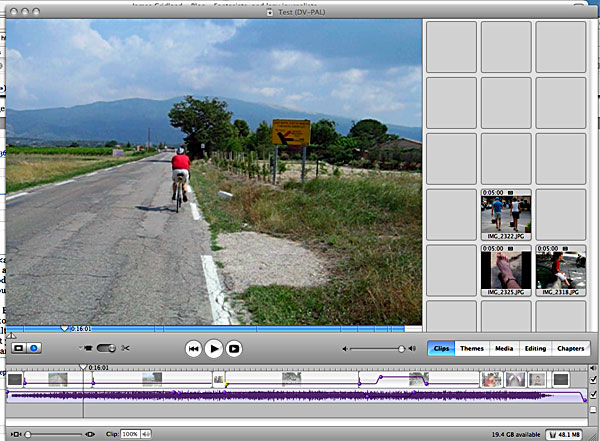 I’ve just tested this by making a complete little film from movie clips and images taken using the IXUS in Provence last year. It was as easy as pie. I’d post it to YouTube were it not for the fact that the soundtrack is from a Leo Kottke album and therefore not my property.

I’m sure you can do all this using Windows, but I’ll bet the tools aren’t as integrated as they are on OS X.

I should also add that it was Quentin who, unwittingly, started me off on this line of thought. He too has an IXUS.

As an experiment I’ve switched from using NetNewsWire as my RSS reader to Shrook.

First impressions: it’s slick, quick and nicely designed. It also has a neat synchronisation feature which enables you to keep details of your feed subscriptions on a central server and then sync from other computers. Useful if you use more than one machine to read stuff.

If you highlight a word in Text Edit or Microsoft Word running on a Mac and then drag-and-drop it onto the Safari icon in the dock, a new browser window will open with the results of a Google search on the word. Neat.

Thanks to Pete for the hint.

Behold the PC world’s first stab at replicating the Mac mini. According to the Guardian Online Blog it costs £699 inc VAT with no monitor, no keyboard, no mouse, no speakers and no wireless. A Mac mini with a comparable spec would cost somewhere between £359 and £429. So you pay extra for all those viruses, worms, trojans and other Windows-enabled vulnerabilities. Weird. If it had been priced at, say, £199 then you could understand the logic.

Lovely essay by the BBC’s North American Business Correspondent, on the Apple religion. He even brings up Umberto Eco’s insightful religious metaphor for the Mac/PC schism:

The Italian philosopher, Umberto Eco, once wrote, tongue only partly in cheek, that Macintosh is Catholic while Microsoft computers are Protestant.

Macs, Umberto Eco opined, were “cheerful, friendly, conciliatory,” traits he associated with Catholicism. More to the point, though, their way of operating was different from Microsoft’s, giving more guidance to users.

Macs would, as Umberto Eco put it, “tell the faithful how they must proceed step by step to reach – if not the Kingdom of Heaven – the moment in which their document is printed”.

He saw that as like Catholicism, in contrast to the Protestant faith which he thought, like Microsoft computers, would “allow free interpretation of scripture, demand difficult personal decisions… And take for granted that not all can reach salvation. To make the system work you need to interpret the program yourself”.

In the last quarter, Apple sold 5.3 million iPods, a 558 percent increase from a year ago. More astonishing though is the news that the company sold 1 million Macs — 43 percent more than in the same period last year. And 40 percent of those were sold to customers who had never owned a Mac before. Wow! Something’s up.

Paul Graham is one of the best essayists about technology writing today. He’s just published an interesting essay on a phenomenon I’ve also noticed.

All the best hackers I know are gradually switching to Macs. My friend Robert said his whole research group at MIT recently bought themselves Powerbooks. These guys are not the graphic designers and grandmas who were buying Macs at Apple’s low point in the mid 1990s. They’re about as hardcore OS hackers as you can get.

The reason, of course, is OS X. Powerbooks are beautifully designed and run FreeBSD. What more do you need to know?

I’ve noticed this too. At the FOO camp in Holland last year, for example, the only laptops that weren’t PowerBooks were Sony Vaio machines running Linux. Paul Graham argues that this migration to the PowerBook and OS X is significant because geeks tend to have an influence on the evolution of computing out of all proportion to their numbers. What they run today, the business community may find itself running ten years on.

Photographed in the Apple Store, London on April 1. 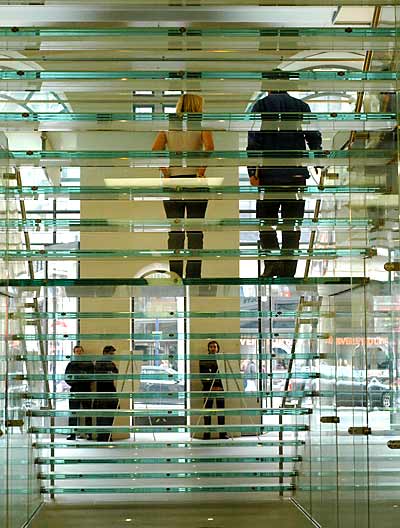