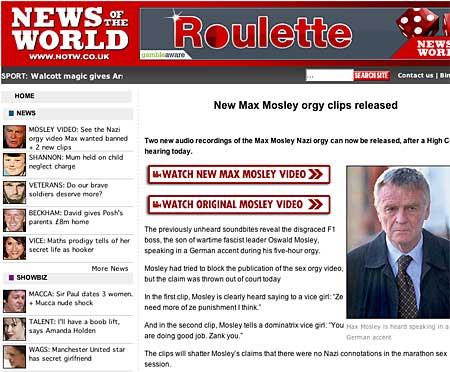 Er, not me, Guv. Just the heading on the News of the World‘s web page celebrating the refusal of a judge to grant an injunction banning them from showing a video allegedly showing F1 boss Max Mosley doing unspeakable things with jack-booted ladies of the night. I’m afraid I was unable to view the offending video because it required the installation of browser plug-ins that I was reluctant to accept, but here’s the surrounding text:

As the judge acknowledged, he was able to see only “very brief extracts” – less than two minutes – of the very much longer video. Had he seen it in its entirety, we are confident that he could not fail to recognise the Nazi connotation which Mr Mosley so strenuously denies.

1. Why are German military uniforms worn?

2. Why does he issue orders and threats in German to women who cannot speak German?

3. Why does he deliver and count out beatings in German to women who cannot understand German?

4. Why does he put on a German accent when speaking English?

5. Why are the victims of these beatings in German made to put on sinister striped uniforms?

6. Why the head lice inspections, the forced shaving of body hair and the sinister references to inmates being housed in “facilities”?

We look forward to Mr Mosley’s answers to all these questions.

Also: is this Max Mosley any relation of Sir Oswald Mosley, the 1930s Fascist leader who was mercilessly lampooned by P.G. Wodehouse as Roderick Spode, the Amateur Dictator and Leader of the Black Shorts movement? Surely not? But (check Wikipedia) yes he is! This is too good to be true. It wouldn’t be the first time that the News made things up. On the other hand, it’s interesting that Mosley hasn’t sued them for defamation (which might suggest that he doesn’t challenge the truth of the story) but for invasion of privacy.

Later: The News of the World claims that traffic on its site has increased by 600% since it re-posted the video.