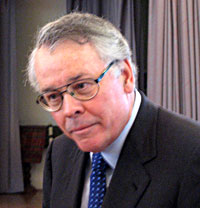 The US Ambassador came to College today, to give a talk to the Gates Scholars, and I sat in on the proceedings.

Robert Holmes Tuttle is a genial cove who apparently continues to be Co-Managing Partner of Tuttle-Click Automotive Group, described by the embassy as “one of the largest automobile dealer organizations in the United States”, while still representing his country. (Wonder what he does when questions about automobile emissions come up.) Mrs. Tuttle, a corporate lawyer, also came along and lent a touch of glamour to an otherwise drab occasion. 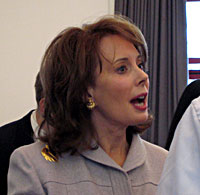 Tuttle’s talk was stupendously banal — partly a paen of praise to his country’s enlightened tax system (eh?), and partly a sermonette on the importance of giving (prompted in part, I guess, by the fact that most of his listeners were in Cambridge because of a huge benefaction made by Bill Gates to the university to establish the Gates Scholars scheme).

The Q&A session with the students was similarly banal. The questions were uniformly respectful and mostly vague. There was not a single mention of the war in Iraq. (John Cleese, where are you when we need you?) A question about anti-Americanism abroad was skilfully deflected by the Ambassador with anecdotal guff about how English visitors to the US are always overwhelmed by the hospitality and friendliness of the natives. He dealt rather well with a questioner who asked whether released US prisoners should have the right to vote (apparently they don’t), by explaining that sometimes there was a conflict between his personal views and the fact that he had to represent his government. Asked what he regarded as the two biggest problems facing the world, he replied “poverty and bad governance”, which I thought was a pretty intelligent answer — especially as I had expected him to trot out the party line about global terrorism.

As he gave his talk, a couple of thoughts came to mind. One was Ambrose Bierce’s definition of an ambassador as “a person who, having failed to secure an office from the people, is given one by the Administration on condition that he leave the country.” Mr Tuttle is a substantial donor to the Republican party, and served as Ronald Reagan’s Director of Personnel. The other thought was that this genial, agreeable chap is essentially the acceptable face of Rumsfeld, Cheney and all the other right-wing nutters who have driven the US into its current cul de sac. He is, in other words, the velvet glove for their mailed fist.