Grief, when it comes, is nothing we expect it to be. Grief has no distance. Grief comes in waves, paroxysms, sudden apprehensions that weaken the knees and blind the eyes and obliterate the dailiness of life. Virtually everyone who has ever experienced grief mentions this phenomenon of “waves”. Eric Lindemann, who was chief of psychiatry at Massachusetts General Hospital in the 1940s and interviewed many relatives of the 492 people killed in the 1942 Coconut Grove fire, defined the phenomenon with absolute specificity in a famous 1944 study: “Sensations of somatic distress occurring in waves lasting from 20 minutes to an hour at a time, a feeling of tightness in the throat, choking with shortness of breath, need for sighing, and an empty feeling in the abdomen, lack of muscular power, and an intense subjective distress described as tension or mental pain.”

Yep. I recognise most of that. This was Joan Didion writing in yesterday’s Guardian about her reaction to the sudden death of her husband, John Gregory Dunne. 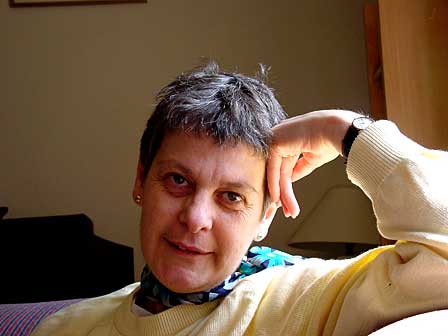 So she lives on, in my mind, still a direct presence in my life. When, two days before she died, I decided I had to tell the children what was about to happen, and we had the most agonising conversation that any father can ever have, I said that when someone you love dies, they live on in your heart. I said that I expected Mum always to be perched on my shoulder, rather like a pirate’s parrot. Then Annie said, through her tears, “They also live on in their children. I’ve got Mum’s looks (which she has) and your eyes and…”. She paused: “… and your temper!” And Tom added: “And I’ve got Mum’s tidiness gene” (which he has).

Today, we all went out for a lovely lunch in her favourite restaurant (which also happens to be in our village) and then we went to a garden centre and bought a lilac tree which I then planted in the front garden where she had planned to put it. And at 15:08 I stamped on the earth and muttered (to my left shoulder): “Well, you can tick that off the list now, sweetheart!” (Because she left a list of things to be done, and I’m not making as much progress on it as I should.)

One of the nicest things today was that I found this photograph in my digital shoe-box. It was taken by my eldest son in April 2002, when we knew she was dying. Her hair had grown back in a beautiful wiry thatch of which she was very proud. It’s a great picture because it shows both her tenderness and her strength. It reminds me of how lucky I was to be loved by her; and of how much I miss her.

Seeking to catch up on reading over the holidays, I took some back issues of the London Review of Books with me. I was particularly taken by “Looking for someone to kill”, one of Patrick Cockburn’s grimly realistic dispatches from Baghdad. I admire Cockburn’s journalism — he and Robert Fisk seem to me to be the best Western journalists writing about the Middle East. I’m also interested in him because I met him once or twice, and because his parents, Claud and Patricia, had been very nice to me when I was an undergraduate in Cork in the 1960s.

Later that day, we went to Donegal in search of more reading material for the kids, and wound up in the Four Masters bookshop on the Diamond, a small shop which has an interesting range of books for sale. It carries, of course, the usual beach-thrillers by Grisham etc., but also stuff (Seamus Heaney’s collected prose essays, Roy Foster’s mega-bio of WB Yeats, Andrew Marr’s lovely book on journalism etc.) which implies a discriminating and quirky owner.

Up on the top shelf I found Patrick’s autobiography, The Broken Boy.

The title comes from the fact that Patrick contracted polio at the age of six, and still bears the scars of it. (Which makes his ability to report from some of the most terrifying places on earth all the more remarkable.) So of course I reached up and took it down. The book fell open at a page showing this photograph. 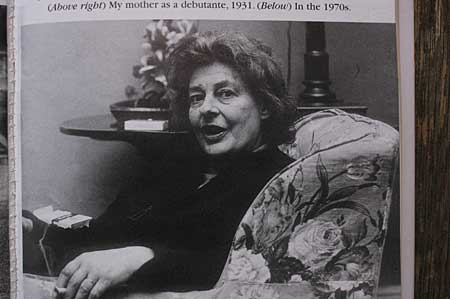 I recognised it immediately as one of mine — I took it in the 1970s when visiting Claud and Patricia in their home in Youghal when I was back from Cambridge. It was lovely to see it used to such good effect, because it captures something of her remarkable spirit.

Claud was one of my heroes, and he and Patricia were immensely welcoming and tolerant of the hotheaded and opinionated would-be journalist who sought their company in the Sixties. I’ve never forgotten Claud’s advice to me when I told him I’d like to try journalism after Cambridge. “Make sure you libel someone important early in your career”, were his parting words. As a TV critic in the 1980s and 1990s, I did my best to live up to it (and enriched some lawyers as a result)! 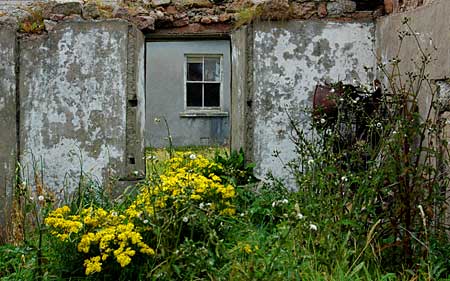 Another variation on the emigration theme. 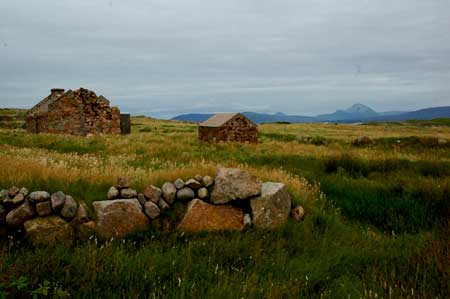 The view from Owey, an uninhabited island abandoned by its last residents in 1973, off the coast of Donegal. There’s something very poignant about these relics of what was once a thriving community, which once even supported a school.

“Today I missed my Japanese class again, since I have gotten a bad throat. I only went to the class once this week, so I am probably so far behind now. I will catch up in the summer tho so no worries hehe. Anyway today has been weird, at 3 some guy ringed the bell. I went down and recognized it was my sister’s former boyfriend. He told me he wants to get his fishing poles back. I told him to wait downstair while I get them for him. While I was searching them, he is already in the house. He is still here right now, smoking, walking all around the house with his shoes on which btw I just washed the floor 2 days ago!”

The guy wandering round the house stabbed him, then waited for his sister to return and then stabbed her to death. For the full story see this NY Newsday report. 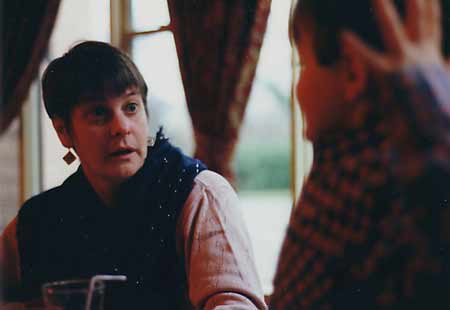 Today is Sue’s birthday. If she had lived, she would be 51. One of those days with bitter-sweet memories. I love this picture of her feigning astonishment at one of Tom’s tall stories. 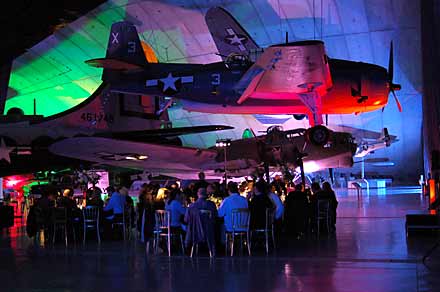 After the Less is More conference, Microsoft took us out to dinner — in the Duxford aircraft museum. We dined beneath a B29 bomber of the type that obliterated Hiroshima and Nagasaki. Strange experience. Nice meal though.

I’ve installed ‘Tiger’ — code for version 10.4 of Mac OS X on two of our home machines, and the installation went just fine and both computers are happily chuntering away. (I’m too rattled by Quentin’s experience to entrust my PowerBook to it yet.) One of the nice things about the new version is ‘Spotlight’ — an amazing desktop search program that indexes the entire contents of your hard drive and finds things instantly. But there’s an unintended side-effect of this — neatly captured in a wry email from a friend:

There is a downside to everything. This is the one for Spotlight: suddenly you see how much you have forgotten. I was busy writing a lecture. Looked for something on Spotlight. And discovered that I had written something very similar a year ago. Completely forgotten. Shocking.

Well, yes. But isn’t it better to be reminded? Besides, great things come from faulty memories. Tim Berners-Lee was motivated to invent the Web partly because he had such a terrible memory and kept losing track of information! Full story on page 233 of this. (Health warning: shameless plug!)

Forty years ago yesterday, Electronics magazine published Gordon Moore’s celebrated article predicting that the number of transistors that could be placed on a silicon chip would continue to double at regular intervals for the foreseeable future. Several years later, the physicist Carver Mead christened it “Moore’s Law”. I met Moore some years ago in Cambridge (where he has endowed a nice library for science and technology), and he was wearing the crappy digital watch which, he proudly declares, cost $15 million. (that’s what it cost Intel to get in and out of the digital watch business).

We met in the University Library and when we’d finished talking discovered that the limo the university had ordered to take him to his next appointment (lunch with the Duke of Edinburgh) had failed to arrive. So I offered him a lift in my chronically untidy car. He climbed in over the crisp packets and tennis rackets and all the other detritus deposited by the kids and nattered cheerfully all the way to Clarkson Road.

When I got home, I told Sue (who was temperamentally an extremely tidy and organised person, and regarded my car as an environmental hazard) about what had happened. She looked at me incredulously. “You did what? You took Gordon Moore in that vehicle!” “Yep”. She went off muttering in disapproval, looked up Moore’s Intel shareholding and calculated that, on that day, he was worth just over $7 billion!