Nobody sleeps at the back when this is on.

The power of a photograph to tell a story 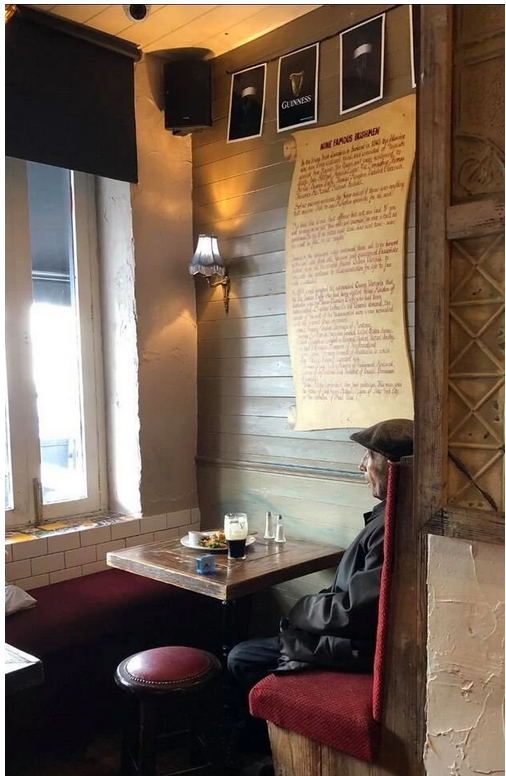 Nice NYT article on the Coronavirus lockdown in Ireland.

A pint of Guinness. A half-eaten meal. And an alarm clock.

All are laid out on a table in front of an older man as he gazes out the window of a pub in Galway, Ireland, in a photo that has come to capture the nation’s coming to terms with coronavirus regulations.

The image has come to symbolize different things for different people: Some have used it to criticize the government’s restrictions on pubs, while others have applauded the man’s commitment to regulations on dining out.

Pubs that serve food have been allowed to open since the end of June. But new restrictions require that customers have a “substantial meal” costing at least 9 euros (about $10.60) if they also purchase alcohol. The rules also require patrons to leave within an hour and 45 minutes — hence the timer.

Like many countries across Europe, Ireland has seen a spike in coronavirus cases in recent weeks, with daily cases moving from the single digits during a lull in new infections in June and July to 307 new cases announced on Tuesday.

The photograph was taken by Fergus McGinn, the owner of the pub. His intention, he said, was to show a man enjoying the simple pleasure of a meal and a drink but he also hopes the picture will make people aware of the role the local pub plays for isolated members of the community in Ireland.

“Taking that away from people, that social outlet for that generation, it could be detrimental and savage on their mental health,” Mr. McGinn said.

Particularly in Ireland’s rural communities, pubs serve as a central place to connect socially, even for those who aren’t big drinkers. Yet pubs that don’t serve food have been closed since the lockdown began in March, though this week the government agreed to reopen them on September 21st.

And the significance of the timer? The government rules also require pub customers to leave within an hour and 45 minutes.

A wonderful actress has passed away. There’s a nice BBC obituary up today, but there will be lots more. As the BBC obit put it, “She excelled at playing sharp-witted female characters who carried steel fists in velvet gloves.” Spot on.

As a former TV critic, though, this book is what I will remember her for. It’s a compendium of the most wicked things theatrical folk can say about one another. I found it an indispensable fountain of ideas when I was writing about a programme or a performer that I particularly disliked.

But the interesting thing is that Rigg also included in it some of the rude things critics said about her!

For example, she reprints John Simon’s crack in New York Magazine about her nude scene in Abelard and Heloise in May 1970: “Diana Rigg is built like a brick mausoleum with insufficient flying buttresses”.

“making my way to the theatre the following day, darting from doorway to doorway and praying I wouldn’t meet anyone I knew. The cast behaved with supreme tact and pretended they hadn’t read the review.”

btw: I think Simon needed to have an eye-test. Rigg was a truly beautiful woman. But she disliked doing nude scenes. “I come from Yorkshire”, she said once, “and no-one from Yorkshire takes their clothes off except on a Friday night”.

What Bob Woodward knew (but didn’t tell — until now)

The veteran Washington reporter Bob Woodward (he of Watergate fame) has made a small industry out of conducting long interviews of US presidents and their courts when he then turns into what are (IMHO) surprisingly dull books. He’s just published the latest tombstone in this series — on the first Trump presidency.

For a less jaundiced perspective, the Columbia Journalism Review has a more detached view of the volume by Pete Vernon.

In books about presidents from Nixon to Obama, Woodward has employed a similar approach, conducting exhaustive interviews on background and using the information he gathers to write from an omniscient perspective. Woodward and Carl Bernstein, his colleague at The Washington Post, used the most famous anonymous source in American history—FBI Associate Director Mark Felt a.k.a. “Deep Throat”—to expose the cover-up behind the Watergate burglary that unraveled Nixon’s presidency. This week, Woodward told Michael Schmidt of The New York Times that “you won’t get the straight story from someone if you do it on the record. You will get a press release version of events.” But as Axios’s Jonathan Swan, one of the current masters of Washington intrigue, noted, sources “also lie on background. A lot.”

And no group of officials in recent memory has proved as willing to bend the truth as those in the Trump administration. The recent controversy over Steve Bannon’s invitation (later rescinded) to appear at The New Yorker Festival led The Washington Post’s Margaret Sullivan to declare, “Enough, already, with anything Steve Bannon has to say.” When Kellyanne Conway appears on CNN, critics question why the network gives a platform to the official who coined “alternative facts.” Yet for Woodward, reliance on the same sources is received differently: If it’s not OK for David Remnick to talk to Bannon in front of an audience, why is it OK for Woodward to use him, quite obviously, as a key source in the book?

Woodward’s approach hasn’t changed; the climate in which his sources are viewed has. Every administration is filled with people who have an agenda, who want to spin events in their favor, but the lines of credibility have shifted. In taking on the Trump presidency as his topic, Woodward is left to assemble a reliable book from unreliable sources….

Already, there are lots of controversies blowing up from specific parts of Woodward’s account. But one in particular has caught my eye. Here’s how Politico puts it:

President Donald Trump acknowledged the “deadly” nature of the coronavirus earlier this year in a series of recorded interviews with The Washington Post’s Bob Woodward, even as Trump publicly sought to dismiss the disease’s threat to Americans.

Recounting a conversation with Chinese President Xi Jinping, Trump told Woodward on Feb. 7 that the coronavirus is “more deadly than your, you know, your — even your strenuous flus.”

“This is more deadly,” he said. “This is five per — you know, this is 5 percent versus 1 percent and less than 1 percent, you know. So, this is deadly stuff.”

A few days later Trump was out in public basically claiming that this ‘Chinese flu’ was not such a big deal and he had it under control, or words to that effect.

There has been a huge hoo-hah about this, particularly the fact that Woodward knew that Trump had been lying through his teeth about the virus, but had decided not to tell anyone, let along the American people. Here’s a sample of the resulting indignation — Bess Levin in Vanity Fair:

When news broke on Wednesday that venerated reporter Bob Woodward’s forthcoming book had Donald Trump on record saying that he purposely downplayed the threat of COVID-19, despite knowing that it was “deadly stuff,” the outrage was deafening. The fury and disgust initially centered around the president’s decision to lie to the public about the fatal virus, proclaiming that it was nothing to worry about while knowing full well that it was. Later the conversation turned to Woodward’s decision to withhold crucial information, with some arguing that it was a dereliction of his duty as a journalist not to come forward and tell people, in real time, that the president was lying to their faces, as he instead saved it for his book. “There is no ethical or moral defense of Woodward’s decision to not publish these tapes as soon as they were made,” former BuzzFeed News Washington bureau chief John Stanton tweeted. “If there was any chance it could save a single life, he was obligated to do so. Bob Woodward put making money over his moral and professional duty.”

I don’t have a dog in this fight, but I was struck by Woodward’s reported response to this charge:

Speaking to the Washington Post’s Margaret Sullivan, Woodward said he waited it out because (1) Trump is a habitual liar, and he hadn’t yet done the reporting necessary to know if the president was actually telling the truth in this instance, and (2) He wanted to put the statements into context and publish them closer to the election so that people didn’t forget about them on their way to the polls:

Who knows? That might have been a shrewd judgement.

This blog is also available as a daily email. If you think this might suit you better, why not subscribe. One email a day, delivered to your inbox at 7am UK time. It’s free, and there’s a one-click unsubscribe button if you decide that your inbox is crowded enough already!