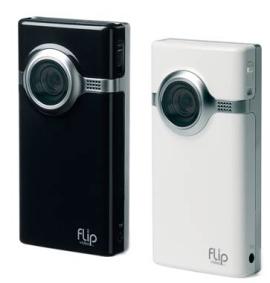 Bah! Just when I thought I’d got my bearings in the micro-video market, here comes an even smaller device from Flip Video.

Thinner and smaller than its popular sibling, the Flip Video Ultra, the Mino crams similar technology into a more compact, more attractive package.

Most of the Mino is about redesign. The USB connector now flips straight up, rather than to the side, for an overall more compact footprint that should fit better in a crowded USB environment. Though it has a slightly smaller LCD display–1.4 inches compared to 1.5–the back navigation controls look a mite more sophisticated than before. Pure Digital has also punted the replaceable battery in favor of a nonremovable Lithium Ion model. The company claims you can shoot for 4 hours on a charge.

Like the 60-minute version of the Ultra, the Mino comes equipped with 2GB of memory, capable of storing 60 minutes of its VGA-resolution video. The company has moved up to a later generation image-processing architecture, so in theory the Mino should provide a bit better image quality, and the company says that the camcorder includes an updated–more sensitive–microphone with improved signal processing. And, of course, it comes with in-camera software that provides the plug-in-and-upload simplicity which endears these camcorders to sharers on sites like YouTube and mySpace; the latter is a new partner for the company. In addition, the Mino now supports direct operation on a Mac, without requiring software installation. It also provides a TV-out connector.