All political careers end in failure, as the old adage goes. What is less often remarked is that most Prime Ministers go mad eventually. And the longer they are in power, the madder they get. By the time she was finally ejected, Margaret Thatcher was barmy. Watching the crazed run-up to yesterday’s government defeat in the House of Commons over the length of detention without charge to be allowed under the new Terror Bill, the thing that struck me most was how Blair steadily escalated the issue to the point where it was all about his ‘authority’. And that, of course is a dead giveaway. That, and his increasingly pop-eyed appearance in TV interview after TV interview in which he argues that He Knows Best. In that, he greatly resembles Thatcher — but with one important difference: whereas she always believed that she was Right, Blair believes that he is not only Right but Good. 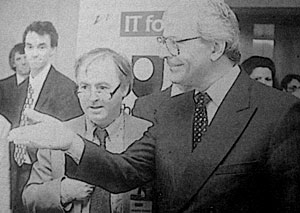 The reason Prime Ministers go mad is simple. They live inside a bubble which comprehensively insulates them from the real world. I first discovered this when I met John Major, the last Tory Prime Minister, towards the end of his premiership (see fuzzy newspaper picture). At that time he was, to all intents and purposes, a busted flush — head of a sleazy, incompetent, incoherent, tired administration which was falling apart. Yet when I met him he was surrounded by four Cabinet ministers, and a phalanx of security people, flunkeys, secretaries and runners. I noticed that everyone, but everyone, around him was smiling, agreeing with him and generally being eager to please. It was “Prime Minister this” and “Prime Minister that”. If you didn’t know any better, you’d have assumed he was Caesar at the height of his powers. Yet, as I say, it was patently obvious that, electorally speaking, the man was dead meat.

That’s how British Prime Ministers live — with a coterie of lackeys who treat them like Gods and insulate them from the real world. It’s basically a reality-distortion field. Tony Blair’s been inside such a field since 1997, and boy is it beginning to show.