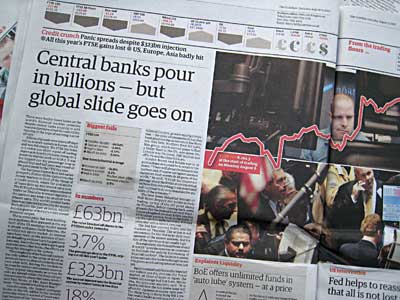 Well, well. I go on holiday and look what happens when my back was turned: a full-blown financial panic. The thing that always baffles me about stock and securities markets is the recklessness of their participants. It was obvious to the meanest intelligence years ago that the US sub-prime racket was nuts because it involved lending money to people whom you knew would not be able to repay it. And now it seems that the entire western banking system was actually turning a blind eye to this obvious fact and absorbing the associated risk. And central banks are pouring money on the flames in the hope of dousing the fire.

Another funny fact about the financial services industries: they want to be free of government interference — except when they screw up, when they expect governments and central bankers to bail them out. As the Guardian put it in a Leader today:

Financiers constantly tell the rest of us to leave them alone. The best regulation, we are told, is the lightest regulation; any more and they will take their ball and will play elsewhere. Apart from when they are in trouble, that is, and then the chaps in the City and on Wall Street sound so interventionist they might as well be speaking French.

It all started in the US, where mortgage lending to low-grade borrowers remained absurdly excessive, even after the housing market peaked in mid-2005. With housing in a state of freefall, many of these so-called sub-prime mortgages went under, and the hedge funds that had placed large bets on the health of these debtors were under water too. The Federal Reserve, the US central bank and a crucial regulator, will face serious questions about why it allowed this leverage to build up. Ever since the days of its former chief, Alan Greenspan, the Fed has been far too willing to permit the financial sector to build excessive risks and then to bail out the failing institutions by easing monetary policy when the proverbial hits the fan. Ben Bernanke, Greenspan’s successor, needs to rethink this strategy, but he has a crisis to handle first.

Does it matter? Alas, yes: our pensions are mixed up in this somewhere.