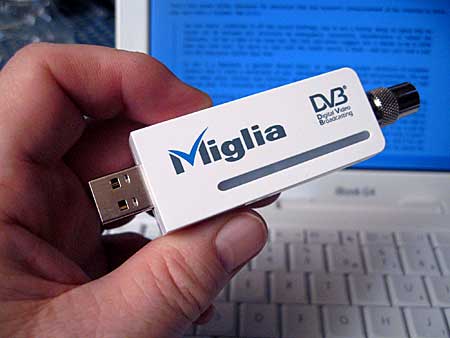 One of my current obsessions is finding graphical ways of illustrating my thesis about the declining role of broadcast televison in the media ecosystem. Over coffee the other morning, Bill Thompson suggested a striking way of making the point. He says that most of those who are children today will never in the course of their lives buy a TV set. That doesn’t mean they won’t watch TV (my point about the way the ecosystem is changing) — just that they will watch it via various devices, none of which will be a special-purpose television set.

As if to emphasise the point, the gizmo in the photograph turned up today. It’s a tuner for digital terrestrial TV. Plug a TV antenna into one end, and the device into my Mac’s USB 2.0 port, run some software and — Bingo! — I’m watching digital TV. What’s more, it turns my computer into a PVR, because I can record off air onto the hard drive.

Now comes a question. At the moment, if you buy a TV set in a store, the retailer sends your address details to the TV Licensing authority, so that they can check to see that you’ve paid your licence fee. Has Apple (from whom I bought the device) done this? More generally, how will the licence-enforcers cope with this brave new world?