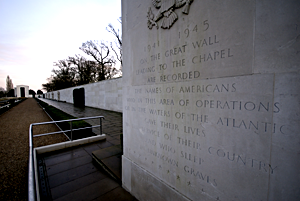 The light was lovely this afternoon and I went for a walk in the American cemetery in Madingley near Cambridge, where there is a long wall inscribed with the names of American servicemen from the European and Atlantic theatres of war who were killed and, as the inscription says, “sleep in unknown graves”. It’s a very long and sobering wall. Halfway along it, I came on a name carved in gilt lettering — which signifies that the named individual was awarded the Medal of Honor.

When I got home, I looked up the citation. Here’s what it says:

For conspicuous gallantry and intrepidity above and beyond the call of duty on 5 June 1944, when he led a Heavy Bombardment Group, in an attack against defended enemy coastal positions in the vicinity of Wimereaux, France. Approaching the target, his aircraft was hit repeatedly by antiaircraft fire which seriously crippled the ship, killed the pilot, and wounded several members of the crew, including Lt. Col. Vance, whose right foot was practically severed. In spite of his injury, and with 3 engines lost to the flak, he led his formation over the target, bombing it successfully. After applying a tourniquet to his leg with the aid of the radar operator, Lt. Col. Vance, realizing that the ship was approaching a stall altitude with the 1 remaining engine failing, struggled to a semi-upright position beside the copilot and took over control of the ship. Cutting the power and feathering the last engine he put the aircraft in glide sufficiently steep to maintain his airspeed. Gradually losing altitude, he at last reached the English coast, whereupon he ordered all members of the crew to bail out as he knew they would all safely make land. But he received a message over the interphone system which led him to believe 1 of the crewmembers was unable to jump due to injuries; so he made the decision to ditch the ship in the channel, thereby giving this man a chance for life. To add further to the danger of ditching the ship in his crippled condition, there was a 500-pound bomb hung up in the bomb bay. Unable to climb into the seat vacated by the copilot, since his foot, hanging on to his leg by a few tendons, had become lodged behind the copilot’s seat, he nevertheless made a successful ditching while lying on the floor using only aileron and elevators for control and the side window of the cockpit for visual reference. On coming to rest in the water the aircraft commenced to sink rapidly with Lt. Col. Vance pinned in the cockpit by the upper turret which had crashed in during the landing. As it was settling beneath the waves an explosion occurred which threw Lt. Col. Vance clear of the wreckage. After clinging to a piece of floating wreckage until he could muster enough strength to inflate his life vest he began searching for the crewmember whom he believed to be aboard. Failing to find anyone he began swimming and was found approximately 50 minutes later by an Air-Sea Rescue craft. By his extraordinary flying skill and gallant leadership, despite his grave injury, Lt. Col. Vance led his formation to a successful bombing of the assigned target and returned the crew to a point where they could bail out with safety. His gallant and valorous decision to ditch the aircraft in order to give the crewmember he believed to be aboard a chance for life exemplifies the highest traditions of the U.S. Armed Forces.

And then I reflected on the fact that our contemporary heroes are footballers.