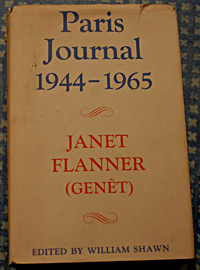 On Christmas Night we went visiting, and our hostess announced that everyone was expected to do a ‘party piece’. Desperate to avoid singing, I asked if I might do a reading and my glance alighted on a wonderful book I hadn’t seen in three decades — the collection of ‘Letters from Paris’ dispatched by Janet Flanner to the New Yorker — and read a passage from that.

Afterwards, I was offered the loan of the book and accepted with alacrity. I’ve had difficulty putting it down ever since. It has some of the best reportage I’ve ever had the good fortune to read. Here, for example, is Flanner’s dispatch for April 19, 1945 in which she describes the scene at the Gare de Lyon:

The next day, the first contingent of women prisoners arrived by train, bringing with them as very nearly their only baggage the proofs, on their faces and their bodies and in their weakly spoken reports, of the atrocities that had been their lot and that of hundreds of thousands of others in the numerous concentration camps our armies are liberating, almost too late. These three hundred women, who came in exchange for German women held in France, were from the prison camp of Ravensbruck, in the marshes midway between Berlin and Stettin. They arrived at the Gare de Lyon at eleven in the morning and were met by a nearly speechless crowd ready with welcoming bouquets of lilacs and other spring flowers, and by General de Gaulle, who wept. As he shook hands with some wretched woman leaning from a window of the train, she suddenly screamed C’est lui!, and pointed to her husband, standing nearby, who had not recognised her. There was a general anguished babble of search, of finding, or not finding. There was almost no joy; the emotion penetrated beyond that, to something nearer pain. Too much suffering lay behind this homecoming, and it was the suffering that showed in the women’s faces and bodies.

Of the three hundred women whom the Ravensbruck Kommandant had selected as being able to put up the best appearance, eleven had died en route. One woman, taken from the train unconscious and placed on a litter, by chance opened her eyes just as de Gaulle’s color guard marched past her with the French tricolor. She lifted an emaciated arm, pointed at the flag, and swooned again. Another woman, who still had a strong voice and an air of authority, said she had been a camp nurse. Unable to find her daughter and son-in-law in the crowd, she began shouting “Monique! Pierre!” and crying out that her son and husband had been killed fighting in the resistance and now where were those two who were all she had left? Then she sobbed weakly. One matron, six years ago renowned in Paris for her elegance, had become a bent, dazed, shabby old woman. When her smartly attired brother, who met her, said, like an automaton, “Where is your luggage?”, she silently handed him what looked like a dirty black sweater, fastened with safety pins round whatever small belongings were rolled inside. In a way, all the women looked alike: their faces were gray-green, with reddish-brown circles around their eyes, which seemed to see but not to take in. They were dressed like scarecrows, in what had been given to them at camp, clothes taken from the dead of all nationalities. As the lilacs fell from inert hands, the flowers made a purple carpet on the platform and the perfume of the trampled flowers mixed with the stench of illness and dirt.

This is wonderful, spare writing. It’s the journalist as eyewitness, giving her reader a feeling of what it was like to be there. It combines the big, impressionistic picture with the tiny details that fix truths in one’s mind: the socialite’s brother, still trapped — despite the war — in his privileged cocoon, asking his sister about her luggage; the unconscious woman who wakes to see the French flag, and then faints away again; the scent of lilacs mixed with the stench of death. Flanner once said of herself: “I act as a sponge. I soak it up and squeeze it out in ink every two weeks.” Quelle eponge!