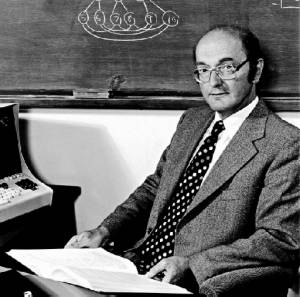 Forty years ago today, Donald Davies of the National Physical Laboratory gave the first public presentation of his idea for a packet-switched network. The strange thing is that he and Paul Baran of RAND independently came up with the concept. Baran got to it earlier but mothballed the idea because of AT&T’s hostility. So when Bob Taylor’s ARPA-funded researchers began working on the design of the ARPAnet they knew nothing about Baran’s earlier work, and only learned about it from Donald Davies. The full story, if you’re interested, is told in my book.

I was privileged to know Donald towards the end of his life — he was the External Assessor for the Open University course You, your computer and the Net which Martin Weller, Gary Alexander and I created in the late 1990s. He was exquisitely polite, modest, reserved and ferociously clever. In the last year of his life, just for amusement, he wrote a simulator (in Visual Basic, if you please) of the German Enigma machine which Bletchley Park cracked during World War 2.