From BoingBoing. CIO.com just published a new detailed map of the North American Internet backbone. 134,855 routers are mapped, each colour-coded to indicate which provider owns it. The colour coding is interesting.

Red is Verizon, blue AT&T, yellow Qwest, green is other backbone players like Level 3 & Sprint Nextel, black is the entire cable industry put together, & gray is everyone else, from small telecommunications companies to large international players who only have a small presence in the U.S.

The CIO journalist who produced the map with Bill Cheswick of Lumeta suggests that what it tells us is that the debate on net neutrality needs to be understood not only in terms of the last mile, but also in terms of the backbone. The players are increasingly the same.

Here’s a close-up of one region. 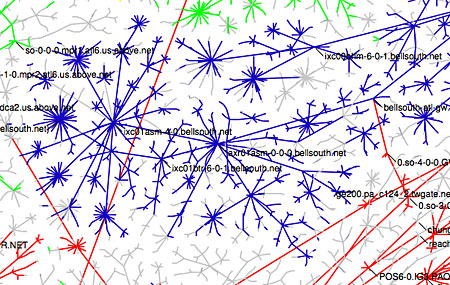