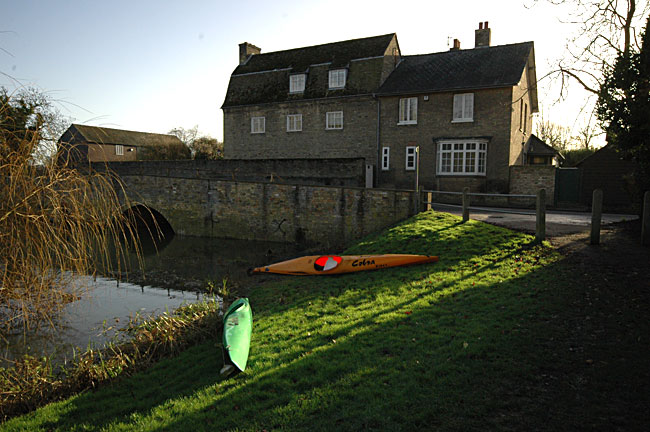 From A N Whitehead’s Autobiographical Notes, 1941.

For about eight years (1898-1906) we lived in the Old Mill House at Grantchester, about three miles from Cambridge. Our windows overlooked a mill pool, and at that time the mill was still working. It has all gone now. There are two mill pools there; the older one, about a couple of hundred yards higher up the river, was the one mentioned by Chaucer. Some parts of our house were very old, probably from the sixteenth century. The whole spot was intrinsically beautiful and was filled with reminiscences, from Chaucer to Byron and Wordsworth. Later on another poet, Rupert Brooke, lived in the neighbouring house, the Old Vicarage. But that was after our time and did not enter into our life. I must mention the Shuckburghs (translator of Cicero’s letters) and the William Batesons (the geneticist) who also lived in the village and were dear friends of ours. We owed our happy life at Grantchester to the Shuckburghs, who found the house for us. It had a lovely garden, with flowering creepers over the house, and with a yew tree which Chaucer might have planted. In the spring nightingales kept us awake, and kingfishers haunted the river.

Hmmm… for years I’d been convinced that this was where Bertrand Russell lived when he was working (with Whitehead) on Principia Mathematica. But it seems I was wrong; at the time (1905), Russell was primarily residing in a house he had built near Oxford. So, although he doubtless spent time in the Mill House, it wasn’t his home.

Whitehead was (unusually for a Cambridge don at the time) a supporter of the Labour party. He recalls:

During our residence at Grantchester, I did a considerable amount of political speaking in Grantchester and in the country villages of the district. The meetings were in the parish schoolrooms, during the evening. It was exciting work, as the whole village attended and expressed itself vigorously. English villages have no use for regular party agents. They require local residents to address them. I always found that a party agent was a nuisance, Rotten eggs and oranges were effective party weapons, and I have often been covered by them. But they were indications of vigour, rather than of bad feeling. Our worst experience was at a meeting in the Guildhall at Cambridge, addressed by Keir Hardie who was then the leading member of the new Labour Party. My wife and I were on the platform, sitting behind him, and there was a riotous undergraduate audience. The result was that any rotten oranges that missed Keir Hardie had a good chance of hitting one of us. When we lived in London my activities were wholly educational.