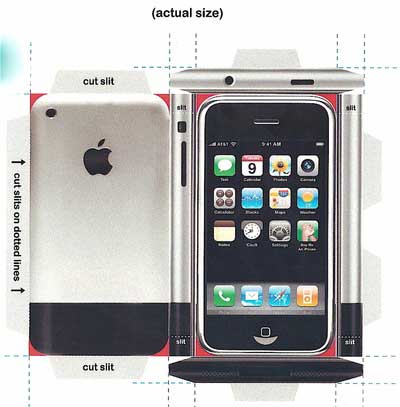 Impress your friends! Confuse your enemies! Make geeks envious! No electronics knowledge needed. Just cut out and stick it together.

Thanks to Gerard for the image.

For those with stronger stomachs, iFixit.com has taken an iPhone apart, like this: 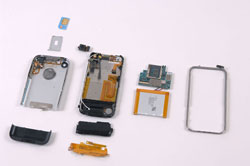 Why, you ask, would anyone want to do this with a perfectly gooe new iPhone. Well, here’s one reason why:

The dismantled — and in some cases, permanently busted — iPhones revealed one of Apple Inc.’s closely guarded secrets: The names of the companies that supplied the chips and other electronic components for the highly anticipated device.

The findings sent all but a few of the component makers’ stocks higher Monday, the first day of trading since the iPhone — a combination cell phone, music player and wireless Web browsing device — went on sale in the U.S. Friday evening for as much as $600 a pop.

The parts makers stand to profit handsomely if the iPhone proves popular over time. Apple itself has set a target of selling 10 million units worldwide by 2008, gaining roughly a 1 percent share of the cell phone market.