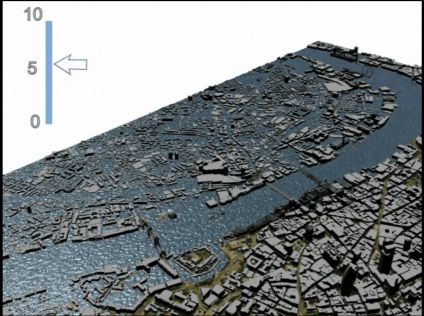 This image, from Andrew Hudson-Smith’s fascinating Blog, shows the output of a 3D simulation of what would happen to London in the event of a rise in sea-level. The commentary says:

South London is built on marsh land and is thus more prone to flooding. We have produced a movie that illustrates sea level rise in metres. It clearly picks up the moat around the Tower of London within a metre increase and then follows on to flood most of the Waterloo/South Bank area of London. The movie does not take into account flood defences, merely a direct sea level rise.