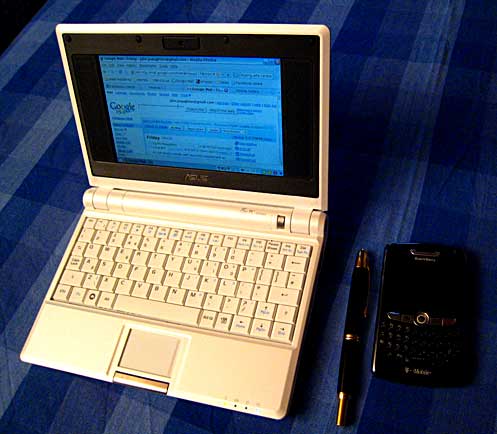 This is the ASUS Eee 701 PC. Acting on the suggestion of a colleague, just before Christmas I slipped into a Toys ‘R Us store, handed over £219 (£186.38 ex VAT) and came home with a smartest little machine I’ve seen in ages. It’s a Linux box configured for the school-kid market (hence the retailer — Research Machines are also selling it to educational institutions), and it’s been a revelation. First of all, it’s really small and portable (0.89kg and not much bigger than a paperback book), but has a usable keyboard, good on-board applications and built-in wireless networking. It’s also an object lesson in how to package Linux for non-techies. Here are the apps, for example:

It comes with FireFox and OpenOffice pre-configured. And the webmail option comes with Google, Yahoo and Hotmail icons all ready to go. Likewise icons for Skype, a Messenger client, Google Docs and Wikipedia. It’s powered by an Intel M 900 MHz processor, has 512 MB of RAM plus 4GB of flash disk, and takes USB drives and an SD card. It also has an 0.3 megapixel onboard camera (plus some apps for using it), a VGA port (for an external monitor) and an Ethernet port as well as microphone and headphone sockets. And all for £186 + VAT.

Having a genuinely small and unobtrusive networking device around is interesting. When I’m home, I tend to have my Mac laptop tethered to a big screen and audio set-up in the study, so find myself carrying the ASUS round the house, using it to read mail or browse BBC News when cooking, or for cheating when we’re doing crosswords at the dining-room table! The 7″ screen is a bit small for some purposes, but in the main it’s perfectly readable.

The only downsides I’ve discovered so far are: