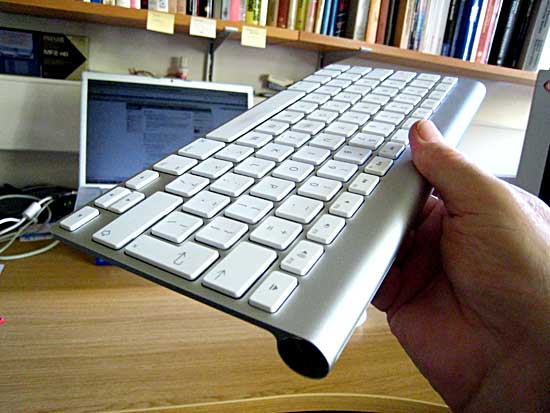 Like many people who write for a living, I’m obsessed with keyboards. I loved the early IBM PC keyboards, which had proper microswitches and made an agreeable clacking sound. But then mass production took hold and the tactile attractiveness of keyboards declined, to the point where most of them had a repulsive mushy feel. Unusually for a company that is supposed to care about design and ergonomics, Apple ignored the keyboard for many years. The ones supplied with successive iMacs were as unsatisfactory as anything produced by the PC industry. And the keyboards on some (though not all) PowerBook models also left much to be desired. (The best, in my experience, was the keyboard on the original G4 Titanium PowerBook).

But now, suddenly, someone at Apple decided that things should change. The new wireless keyboard is simply delicious to use. And it’s a marvel of economical compression which fits neatly into my laptop case.

The battery holder serves as a wedge that tilts the keyboard at a good angle for typing. And the on-off switch is neatly built into the end. As the man said, sometimes the right thing is the right thing to do.