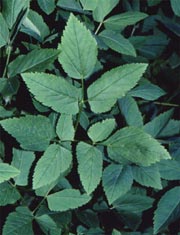 Sue was a wonderful gardener and she left me with a nice garden — but without the knowledge, skill or time to maintain it properly. Now I find that I’ve got a serious problem with Ground Elder (Aegopodium podagraria to you) which Wikipedia tells me is “a common weed in the carrot family”. This seems to me to be a terrible libel on the carrot family, an amiable and delicious tribe. GE is a fiendish pest — and one that is virtually impossible to eradicate. It is, as this site helpfully puts it, “one of a handful of really nightmarish weeds. You have to be completely committed to getting rid of it as it takes constant vigilance and persistence. White flowers are produced from May to July.” The main way to keep it under control “is through constant vigilance – never allow the weed to flower or seed”.

Hmmm…. Contemplating this depressing news, I was struck by two thoughts. The first is that anyone who finds a remedy for this weed will not only do the world a great favour but become deservedly rich as well. In that respect, a cure for Ground Elder would be a much greater contribution to civilisation than any number of social-networking sites. The second thought is that Microsoft must feel about Open Source software much as I feel about Ground Elder!

Wikipedia claims that Ground Elder was brought to Britain by the Romans. Wish they would take it back then.