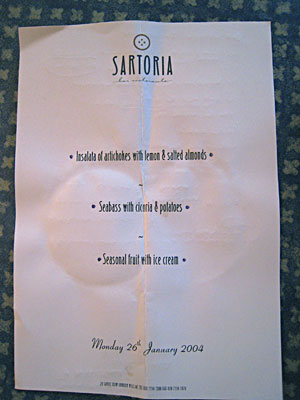 It’s funny what one finds in suit pockets. I have one posh, hand-made suit which I wear in the same way that admirals wear swords — on ceremonial occasions only. Rummaging in its pockets this morning I found this menu from Sartoria, an oh-so-New-Labour eaterie in Saville Row. It’s from a dinner party on the evening of Monday, January 26 2004, hosted by then Chairman of the BBC, Gavin Davies, who wanted to talk about the BBC’s ventures in the online world. Everyone present was aware that the report of Lord Hutton’s inquiry into the death of Dr. David Kelly was to be published on the following Wednesday, but we stuck resolutely to talk of online matters. In the Gents on the way out, however, I had a brief conversation with Gavin during which I wished him luck for the week ahead. It was clear from how he replied that he expected a tough time. But it was also clear that he expected Hutton to hand out blame all round. He was wrong: m’learned friend produced a whitewash, and by the end of the week both Davies and his Director-General, Greg Dyke, were gone.

As it happens, I think that Greg Dyke handled the Kelly story ineptly, but the ironic thing is that the BBC report that triggered Dr Kelly’s suicide and the Hutton Inquiry was essentially true. The Intelligence ‘dossier’ was indeed “sexed up” to persuade the British public — and Parliament — to support the Blair/Bush invasion.