Today marks the 30th anniversary of the first TCP/IP message exchange between three networks. It was orchestrated from this van. 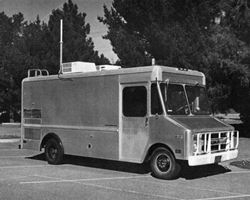 The exchange took place between SRI International, Menlo Park and the University of Southern California via London, England. The networks involved were the ARPANET, the Bay Area packet radio network, and the Atlantic packet satellite network.

This inter-network transmission among three dissimilar networks is generally regarded as the first true Internet connection. It was also a major milestone in packet radio, the technology behind WiFi and other kinds of wireless internet access.

On November 7, the Computer History Museum and the Web History Center held a special celebration of the moment with contributions from Vint Cerf, Bob Kahn and Donald Nielson.