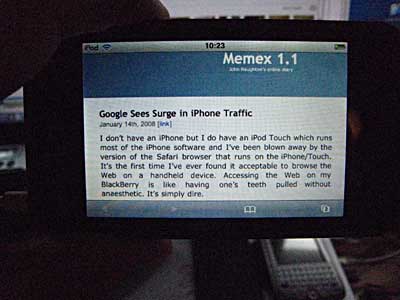 I don’t have an iPhone but I do have an iPod Touch which runs most of the iPhone software and I’ve been blown away by the version of the Safari browser that runs on the iPhone/Touch. It’s the first time I’ve ever found it acceptable to browse the Web on a handheld device. Accessing the Web on my BlackBerry is like having one’s teeth pulled without anaesthetic. It’s simply dire.

On Christmas, traffic to Google from iPhones surged, surpassing incoming traffic from any other type of mobile device, according to internal Google data made available to The New York Times. A few days later, iPhone traffic to Google fell below that of devices powered by the Nokia-backed Symbian operating system but remained higher than traffic from any other type of cellphone.

The data is striking because the iPhone, an Apple product, accounts for just 2 percent of smartphones worldwide, according to IDC, a market research firm. Phones powered by Symbian make up 63 percent of the worldwide smartphone market, while those powered by Microsoft’s Windows Mobile have 11 percent and those running the BlackBerry system have 10 percent.

The iPhone has taken the frustration out of browsing on a mobile phone, said Charles Wolf, an analyst with Needham & Company.

Other companies confirmed the trends, if not the specific data, observed by Google. Yahoo, for instance, said iPhones accounted for a disproportionate amount of its mobile traffic. And AdMob, a firm that shows billions of ads on mobile Web sites every month, said it saw traffic from iPhones surge drastically around Christmas.

The stats are significant: Google is seeing almost as much traffic from a device that has 2 per cent of the phone market as from Symbian phones which have 63 per cent of the market. There’s a lesson there, Nokia.