Bah! Quentin has a new toy.

It’s the Sony PRS – the Portable Reader System – which is a bit like a giant read-only PalmPilot that uses the new e-Paper type display. It’s designed to be a replacement for a paperback – a way of viewing eBooks, and unlike some earlier devices, it’s not limited to DRM-encoded books downloaded from the manufacturer. You can put text files, RTF files, PDF files on it as well, and they look gorgeous.

However, there was a big question-mark over my purchase, which was that there is no official Mac or Linux support for this device. You can use a card reader to plug an SD card into your Mac, copy the files onto it and then plug it into the PRS, but that’s hardly convenient, especially in comparison to the (optional) USB docking station. Sadly, the PRS doesn’t just appear as a USB storage device. You can run the Sony software just fine under Windows using Parallels, but that’s yucky too…

Needless to say, he’s hacked it. He’s found a way to take an arbitrary document on his Mac and make it available as a pdf on the Sony device. See the full post for the grisly details.

Later… And to add insult to injury, he’s put Memex on it! 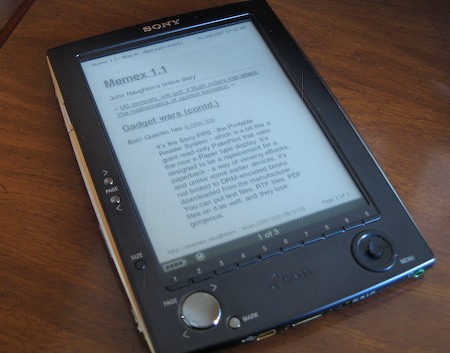