To build a five-star spa hotel on this spot was always going to be controversial. For an American corporate hotel chain to do so seems, at the very least, eccentric. From my chic, minimalist £130-a-night room with its flat-screen TV, Villeroy and Boch porcelain and Molton Brown toiletries I can look down the Obersalzberg mountain to the town of Berchtesgaden in the valley below, I can see the woods where Hitler walked with his mistress Eva Braun; see where his henchmen, Goering and Bormann, had their houses; see the site of the old SS barracks. Unlovely ghosts.

Most of the original buildings have long since been demolished. Hitler’s own residence, the Berghof, was flattened by Allied bombers in 1945. But the legacy of the Nazi era, when the party annexed a 100-acre area, turfing out farmers and creating a summer holiday resort for the top brass of the Third Reich, is not comfortable baggage for any hotel to carry. All the feng shui in China cannot sweeten this site.

Inevitably, the building of the InterContinental – a striking modern edifice with cool, white walls and huge windows affording panoramic views – sparked fierce debate in Germany. Last year, Michel Friedman, a former deputy head of Germany’s Central Council of Jews, led the protests. ‘The use of the site as a hotel masks the historical reality. Such places should be preserved and used for a totally different purpose.’

I went to Berchtesgaden once, just to see what remained. It’s an eerie place, with stunning views — and those ghosts. 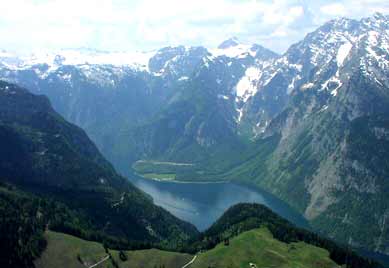