This is the Weichert seismograph recording for 13:12 GMT on April 18, 1906. Location: San Francisco.

Here’s the result — as captured by George Lawrence with a huge panoramic camera flown aloft by kites. This is a blown-up section of Lawrence’s huge photograph (fuller version here.)

The 1906 earthquake was felt as far away as Oregon and central Nevada. Strong shaking was experienced as far north as Eureka and as far south as King City. The San Andreas Fault ruptured along a length of almost 300 miles, from San Juan Bautista to Shelter Cove (south of Eureka), with maximum surface offsets as much as 28 feet. Much of what wasn’t destroyed by the quake was wiped out by the fires which broke out. As ever, there was looting — of which the Mayor took an exceedingly dim view (as this exhibit from the city’s Virtual Museum makes clear): 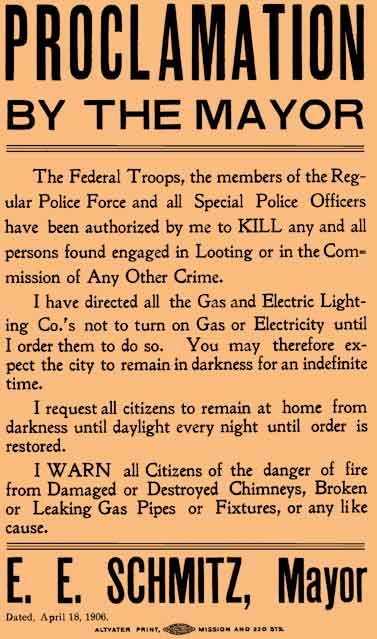 One member of the team, Scott Haefner, still does kite aerial photography. He has an interesting website.