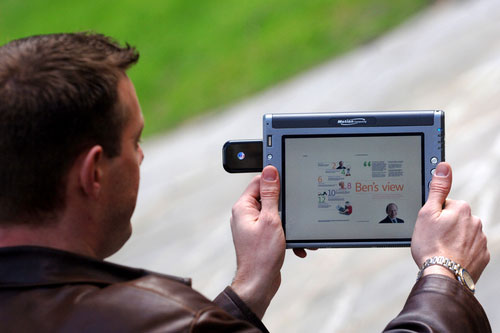 British Telecom (BT) is working on a plan to eliminate the keyboard and mouse, and use accelerometers with tablet PCs instead.

The pilot project enables a user to scroll through menus or applications simply by tilting or rotating the tablet PC. The system starts with a specially designed adapter containing tiny accelerometers, which measure acceleration. The adapter plugs into any tablet PC via a USB cable. When a user moves the PC, the sensors detect the motion. Special software then interprets the PC’s movements and translates them onto the computer screen.

“What we want to create is a kind of broadband Etch A Sketch,” says BT researcher David Chatting, who wrote the applications for the prototype.

The trick, he says, is getting people sensitized to how moving the PC affects what happens on the computer. “One of my initial applications entails using the PC to manipulate a marble on the screen. I want to demonstrate to the user that how they’re holding the device affects what’s happening–that they have an almost physical connection to the content on the screen.”

For now, Chatting’s applications are simple. A user moves the machine left or right to toggle between a few menu choices on-screen, and then pulls the machine forward to select a menu item. “We aren’t trying to duplicate all [of] Windows Vista or Mac OSX,” Chatting says.