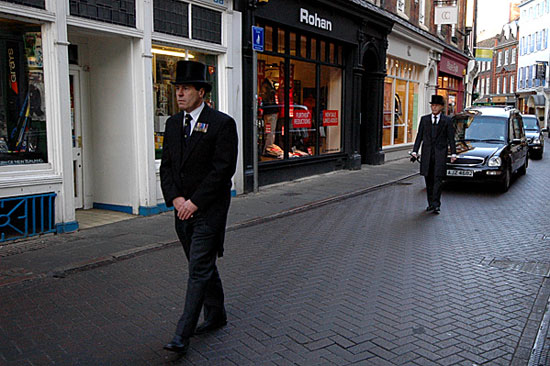 This was the scene in Trinity Street, Cambridge, this morning, as the funeral cortege of Philip Grierson made its way slowly to his College, where it was greeted by a silent crowd of mourners. He died on January 15 at the ripe old age of 95 and was the last of a distinctive breed — the bachelor Don, who lived all his adult life in College rooms and devoted most of his energies to teaching, research and scholarship. Philip Grierson was an historian who specialised in numismatics and built up (on a university salary) one of the world’s greatest collections of medieval coins — reportedly valued at between £5 and £10 million. (He donated the collection to the Fitzwilliam Museum.)

In the best tradition of his class, Grierson had memorable eccentricities: he could fly a plane but never learned to drive a car; he once walked from London to Cambridge (a distance of 56 miles) simply because he had missed his train; and he simultaneously held major academic posts at three important institutions — Cambridge, Brussels and Harvard’s Dumbarton Oaks Collection. He seems to have been a formidable scholar, producing upwards of three hundred academic papers and numerous scholarly tomes.

One thing seems certain: we shall not see his like again — the bean-counting ethos implicit in the Research Assessment Exercise has seen to that. Ambitious Cambridge academics are increasing wary of College life because it threatens to distract them from research and embroil them in pastoral care of the young.

There were some nice obituaries — notably in the Guardian and the London Times. The bulk of the text of the Independent‘s obit has disappeared behind a paywall, alas.