This is just lovely — a Flash portfolio from Magnum of Elliott Erwitt’s personal best. Make some coffee, draw up a chair and marvel at his wonderful photographic instinct.

There’s a nice profile of him by Rose George here.

Erwitt has a reputation for quietness. A journalist once wanted to write 12,000 words on the man, and a fellow photographer said, “In all the years I’ve spoken to him, Elliott hasn’t spoken 12,000 words.” Actually, he speaks easily. He smiles and twinkles. He is one of the few people who can treat an interview as a conversation. […] “Photography is very simple,” he says. “People make it so technical, so complicated, to disguise the fact. They overcompensate.”

You don’t study photography — you just do it.

Dogs are people with more hair. 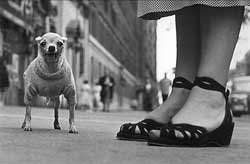 (Erwitt is the greatest living photographer of dogs — and their owners — IMHO. His technique: “I bark; they jump”.)

Not that he won’t supply the funny anecdotes of a 50-year veteran: The Shah of Iran wore platform heels (“You could tell from the pant creases”). Che Guevara was good-looking but not charming, Marilyn Monroe the opposite. One notorious image – the “kitchen debate” of Richard Nixon and Nikita Kruschev arguing at a Westinghouse exhibit – almost didn’t happen because he was laughing too hard: Kruschev told Nixon to “Go screw my grandmother” in Russian, which the child of Boris and Evgenia understood perfectly.

I’ve always wondered what Kruschev was saying in that exchange. Nixon was presumably lecturing the Soviet boss on the superiority of American refrigeration technology. Elliott’s anecdote confirms that the truth is usually more amusing than the official version. For example, as a kid I was addicted to the Lone Ranger who — older readers will remember — had a faithful Indian companion called Tonto. Whenever the (White Anglo-Saxon) Ranger spoke to Tonto, he replied “Kemo Sabay” which — in my innocence — I assumed to be the Native American equivalent of “Yes, Boss”. But one day I ran into a guy who claimed to be an expert on native American languages and swore that “Kemo Sabay” actually meant “Horseshit”.

Many thanks to Brian for the link.

“Khrushchev certainly wouldn’t have involved himself in the insult to “MY” grandmother, it must have been “YOUR” grandmother: as the French have it on record ” …et ta soeur”.

I bow to his superior expertise.