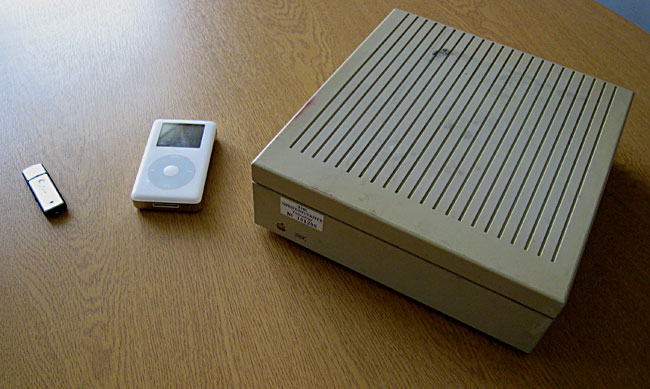 Clearing out my office, I came on an old Apple external hard drive from the 1980s. Capacity: 20 Megabytes — which is 0.02 Gigabytes. Next to it is a 60 GB iPod. Next to that is a 2GB flash drive. Sobering, isn’t it? The strange thing is that the Apple drive seemed enormous at the time. I remember thinking that if I wrote continuously for 10 years I still wouldn’t have generated enough text to fill it.

But then Bill Gates once said that 640 Kilobytes of RAM ought to be enough for anyone. Or maybe that’s just an urban legend. He’s too smart to have said something that dumb. In the old days, people used to say that you could never be too thin or too rich. Nowadays we say that you can never have too much RAM. Or disk space.

What is true is that Natham Myhrvold (who was for a time Gates’s technical guru) observed that “software is like a gas — it expands to fill the space available”.