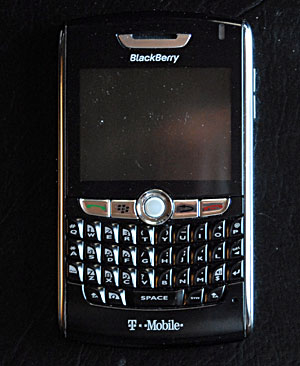 My BlackBerry 8800 arrived yesterday. It’s slimmer but wider than the battered 7100 it replaces. It’s exceedingly glossy in the way that iPod Nanos are — which means it will scratch easily. It has a QWERTY keyboard suitable for midgets. Mostly it works as advertised, but it has lots of what the O’Reilly crowd call ‘annoyances’. For example, the onboard browser is a pathetic piece of software. And T-mobile’s attempts to keep one within their T-Zones walled garden are infuriating. It’s much more difficult to customise profile settings than it was on the 7100.

The phone comes with an inbuilt GPS system, which seems like a good idea — until one confronts the annoying reality. First of all, it doesn’t come with any maps! No problem, you say — they’re available as free downloads from the BlackBerry site. But then it transpires that you have to hook the phone to a Windows machine to install them.

But hang on — shouldn’t one be able to download maps directly to the phone? Yep — just go to mobile.blackberry.com. But guess what? — the download doesn’t work. In fact, it helpfully informs you that the 8800 is not a supported device! And then comes the coup de grace: there are no maps for the UK! Correction: there are maps for Northern Ireland, but nothing for the mainland. So no maps for Gt. Britain.

In the end, it’s a perfectly useless device except for the one thing that makes it indispensable: push email.

Aside: My colleague Geoff Peters has a term for people like me who use BlackBerry phones and Apple computers: blackberry and apple crumblies.