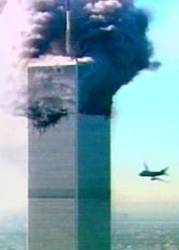 It’s such a cliche. And yet cliches express truths, even if they are sometimes banal. I’m of an age when I can remember where I was when Jack Kennedy was assassinated. (I was in my bedroom, dutifully doing school homework.) Maybe it made a deeper impression because I had earlier that year seen him in the flesh.

For the generation who are now in their twenties, 9/11 will have the same kind of memorability. According to the Pew Research Center’s national survey, conducted Aug. 9-13 among 1,506 adults,

nearly every American (95%) can still recall exactly where they were or what they were doing when they first heard the news of the Sept. 11 attacks, and roughly half (51%) say that the attacks changed life in America in a major way.

For me, September 11, 2001 has a special resonance. It was the day Sue underwent the operation that we hoped might give her a chance of beating her cancer. She was first on the surgeon’s list, due to go down to theatre at 10am. I got the kids to school early and set off for the hospital to see her before she went under the knife. The traffic that morning was indescribable. I had to invent a crazy, circuitous route to avoid the city. When I got to the hospital, I dumped the car and ran up to the ward. She was sitting up, quite composed. When she saw the state I was in, she told me to go home, do something to take my mind off the operation, and come back at lunchtime, when she would be coming out of the anaesthetic. “Stop making such a fuss” was the hidden message. So I obediently kissed her goodbye and went off to collect examination scripts for a Masters course for which I was then an External Examiner.

The strategy worked — for a while: marking the scripts took my mind off what was happening up at the hospital. I got back to the house at 12.30pm and rang the ward. No, Mrs Naughton wasn’t back from theatre yet. I rang again at 12.40. Still she wasn’t back. Stifling panic, I asked to speak to the senior nurse on the ward. She explained that there would probably be a simple, non-sinister explanation. She checked, and there was — an emergency operation that had taken precedence. “Come in around 2pm”, she said, “Sue should be back by then”. I put down the phone, choking with relief.

As I replaced the handset, it rang. It was an old friend who had recently gone to visit her son in his New York apartment. She was phoning to see how the operation had gone. I told her what had happened and we talked about the whole business. She told me she was standing by the window and that it was a beautiful morning. She had plans to visit a bookshop and then to buy food. She was going to cook that evening. Then the line went quiet. “Are you still there?” I asked. “I’ve just seen a plane fly into the World trade Centre”, she said.

While we talked, I launched a web browser. It took an age for the program to load. I typed “www.cnn.com” into the address bar. No response. The site was already buckling under the load. We continued talking — about the density of air traffic over New York, about the fact that a terrible accident like that was bound to happen, one day. Then my friend went quiet again. “I’ve just seen another plane fly into the tower”, she said. “I’m going to move away from the window”. We said muted goodbyes. I switched on the TV. The BBC had a news flash — and then cut to live footage of the two towers, smoking in the sunshine. My friend spent the rest of the day on the roof of the apartment building, watching the disaster unfold. The worst thing of all, she told me later, was seeing the people who jumped to avoid the flames.

At the time, another old friend had just taken up residence in New York, living in an apartment on Washington Square. I rang the number. He answered, sleepily — still jetlagged. “Do you know what’s going on?” I asked. “What’s going on?” he responded. “The Twin Towers have been attacked”. “Come off it”, he snorted. “Can you hear anything?” I asked. “Now that you mention it”, he replied, “I can hear a racket down on the street”.

At the same time, a third friend who is a professional colleague of Cherie Blair, was in a meeting with her. Her mobile rang. She picked it up, listened and then put it down. “What’s up?” said my friend. “There’s been a terrorist attack in New York”, she replied. “Is it bad?” “Must be”, she replied. “Tony was on his way to speak at the TUC Conference and he’s turned back”.