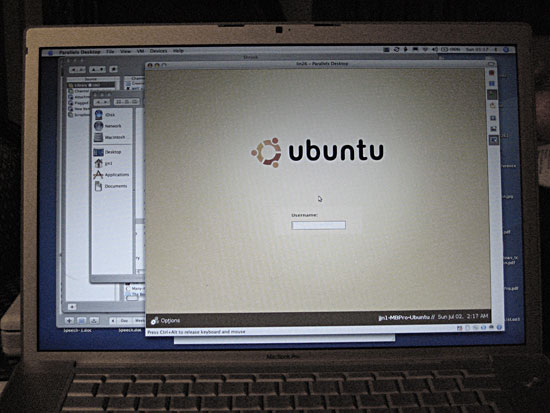 I know it’s not a very exciting photograph, (Quentin has a much better one on his Blog) but it’s significant in its way. It shows Ubuntu Linux running faultlessly alongside Mac OS X on my Dual Core Mac, courtesy of Parallels Workstation. If I had more RAM (and a Windows licence) I could also run Windows XP (as Quentin does). Virtualisation is an old idea, but it’s really coming of age now. And what it means is that the one-to-one bonding between the platform and the application is being eroded. So not only is the network becoming the computer, but the computer is becoming any operating system you like. Quentin thinks that virtualisation — or virtualization, as Google likes it — is going to be a very hot topic from now on, and I think he’s right. Just look at this experiment he set up at Ndiyo.