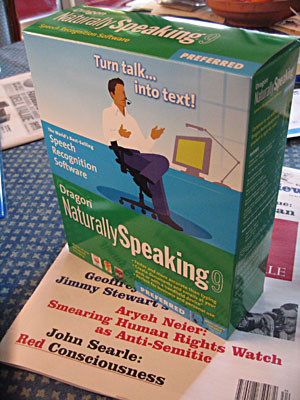 Because of my arthritis and occasional worries about RSI, I’ve been wanting to try modern dictation software for a while. (I’d tried earlier generations and found them woefully inadequate.) This arrived the other day, and it’s simply stupendous. In fact it’s positively eerie. to be able to talk naturally to a machine and have it faithfully transcribe what you’re saying. It only required about five minutes’ ‘training’ — though I managed to screw up even that. The program offers you a number of scripts from which to read while it’s getting used to your voice. Choices included JFK’s Inaugural speech, a passage from Alice in Wonderland and Dave Barry’s column on “How Computers Work”. Needless to say, I chose Dave Barry. As a result, the training session took much longer than expected because I kept dissolving into hysterical laughter. The only problem is: Dragon software only runs under Windows. But it’s so good that I’m tempted to install XP on my Mac and run it under Parallels so that I can switch seamlessly from OS X to Dragon and back again. That way, I’m selling only half my soul to the devil.