In the chapter on publishing in his forthcoming book, Jeff Jarvis writes this:

So here’s the question: Why shouldn’t books have ads to support them as TV, newspapers, magazines, and radio do? Ads in books would be less irritating than commercials interrupting shows or banners blinking at you on a web page. Would it be any more corrupting to have ads in this book than next to a story I write in Business Week? Well, you’d have to tell me. If I were to have had a sponsor or two for this book, who would it have been and what would you have thought of my work as a result? If Dell bought an ad—because, after all, I now have nice things to say about them—would you have wondered whether I’d sold out to them? I would fear you’d think that. What about Google itself? Obviously, that wouldn’t work. Yahoo? Ha! Who might want to talk to you and associate themselves with the thinking in this book while also helping to support it? I’m not sure. Let’s discuss that for the paperback I hope gets published. Come to my blog and tell me what you think.

Do you think I should take a sponsor or two for the book (I’m not saying it’s an option; this is a discussion)? If so, who would make a good sponsor? Who wouldn’t? Would it affect your thinking if a sponsored book cost less? Should I then wish for a sponsor not only because it reduces the risk for the publisher and me but because it means more books could be sold at a lower price spreading the ideas in the book farther?

It’s worth reading the post in full because it attracted a good many thoughtful comments from readers, most of whom were sceptical.

The ads on Jeff’s blog at the time constituted such a nice counterpoint to the discussion in the text that I just had to clip the image! 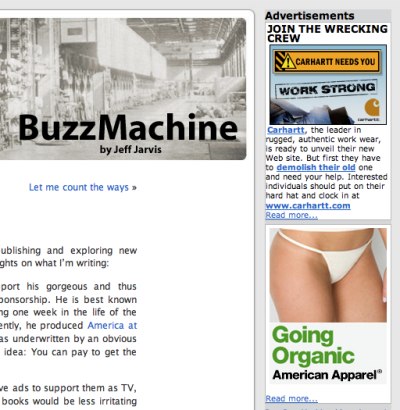