Every Christmas there is a Must-Have gadget. It’s the thing that kids put on their Santa lists and has always sold out just before their addled parents get to the stores.

This year’s gadget is the Nintendo Wii — which (I can personally testify) is a fascinating device. Its USP is a controller fitted with accelerometers that you wave about — like so: 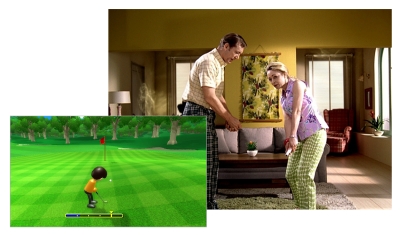 And therein lies a tale…

Today’s NYT is reporting that,

Nintendo said Friday that it was taking steps to keep energetic users of its new Wii video game console from breaking their televisions and ceiling fans.

[…] The trouble is that some players have grown so enthusiastic that the controller has slipped from their hands and taken brief flight. Players are supposed to use wrist straps attached to the controllers, but in some cases these have snapped.

Nintendo said it had begun a voluntary replacement program for the wrist straps. Thicker straps should mean fewer flying controllers, said Beth Llewelyn, a spokeswoman for Nintendo of America.

The new straps are free, Ms. Llewelyn said, but the company is not committing to replacing other household items — like the handful of televisions that have reportedly been smashed by unleashed controllers…