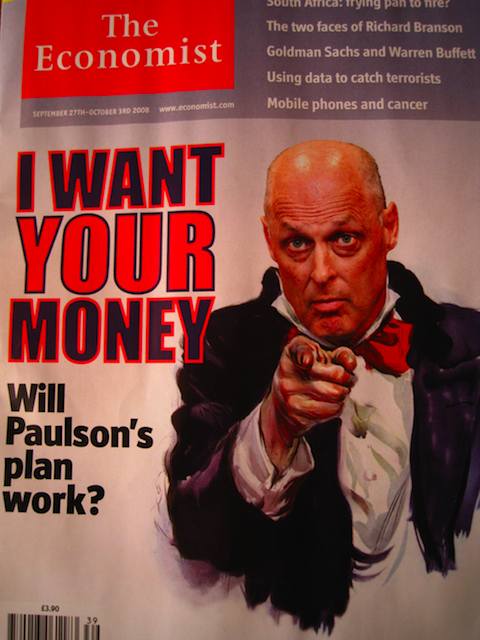 A few days ago I mentioned that the markets were thinking about the possibility of the US government defaulting on its debts. Professor Charles Goodhart, a noted UK economist, then came on BBC Radio explaining that it was impossible for a government to default in this way, and I assumed I had simply misunderstood the signals. But in today’s Financial Times, Gillian Tett reports as follows:

Yes, you read that right: the entity that brought us big fries and the floppy clown commands as much gravitas in the credit world as the mighty US of A.

These CDS prices might seem weird: it is extremely unlikely the US will default. But there are at least two factors making investors jittery. One is the rising cost of US bail-out plans. If you spend $50bn here (to support money market funds), $85bn there (to rescue AIG), another $30bn (to complete the Bear Stearns deal) and then $700bn (for a bail-out), soon you are talking serious numbers.

More specifically, the rescue proposals from Hank Paulson, US Treasury secretary, are threatening to push gross US debt well above 70 per cent of GDP for the first time since 1954…