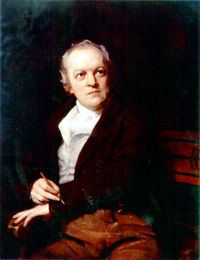 250 years ago today, the poet, painter and engraver William Blake was born in Soho. One of the great paradoxes of life is that a poem (“Jerusalem”) written by this dazzling revolutionary and dissenter should have been appropriated for imperialist anthems.

And did those feet in ancient time
walk upon England’s mountains green?

And was the holy Lamb of God
on England’s pleasant pastures seen?

And did the countenance divine
shine forth upon our clouded hills?

And was Jerusalem builded here
among these dark Satanic Mills?

I will not cease from mental fight,
nor shall my sword sleep in my hand,

till we have built Jerusalem
In England’s green and pleasant Land.

I’ve often wondered how this came about. Wikipedia offers this explanation:

The poem, which was little known during the century which followed its writing, was included in a patriotic anthology of verse published in 1916, a time when morale had begun to decline due to the high number of casualties in the First World War and the perception that there was no end in sight.

Under these circumstances, it seemed to many to define what Britain was fighting for. Therefore, Robert Bridges, the Poet Laureate asked Parry to put it to music at a Fight for Right campaign meeting in London’s Queen’s Hall. The aims of this organisation were “to brace the spirit of the nation that the people of Great Britain, knowing that they are fighting for the best interests of humanity, may refuse any temptation, however insidious, to conclude a premature peace, and may accept with cheerfulness all the sacrifices necessary to bring the war to a satisfactory conclusion”[3]. Bridges asked Parry to supply the verse with “suitable, simple music that an audience could take up and join in”. Originally Parry intended the first verse to be sung by a solo female voice, but this is rare nowadays. The most famous version was orchestrated by Sir Edward Elgar in 1922 for a large orchestra at the Leeds Festival. Upon hearing the orchestral version for the first time, King George V said that he preferred “Jerusalem” over “God Save the King”, the National Anthem.