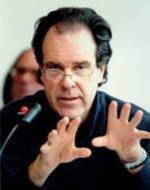 That’s the title of the lecture John Lloyd is giving in Cambridge tomorrow to mark the 25th Anniversary of the Wolfson Press Fellowship Programme. John is now Director of Journalism Studies at the Reuters Institute in Oxford, but he’s done a lot of other things in his time. He was, for example, Founding Editor of the Financial Times Magazine, and now writes a weekly column about television. He has been a contributing editor at the Financial Times, reporter and producer for London Weekend Television’s London Programme and Weekend World, and editor of Time Out and the New Statesman magazines. He has written several books including “What the media are doing to our politics”. He also recently co-edited (with Jean Seaton) a special issue of the Political Quarterly entitled What Can Be Done?: Making the Media and Politics Better.

Lecture details here. All welcome. Please email press [at] wolfson.cam.ac.uk if you intend to come.