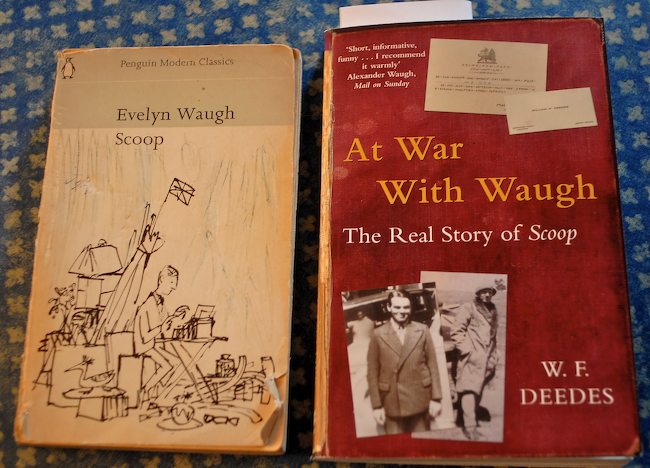 If, like me, you love Evelyn Waugh’s Scoop, then you’ll love Bill Deedes’s account of what it was actually like in Abyssinia during the Italian invasion and afterwards. Deedes was supposed to be the model for William Boot, Scoop‘s hapless hero, but it’s clear that the only aspect of the young Deedes that really corresponds with Boot was his luggage. When Deedes was setting out for the war-zone, few people in London really had a clue about the Abyssinian climate, so he was — perhaps understandably — equipped for every eventuality.

The Foreign Contacts Adviser of The Beast telephoned the emporium where William was to get his kit and warned them of his arrival; accordingly it was General Cruttwell, F.R.G.S., himself who was waiting at the top of the lift shaft. An imposing man: Cruttwell Glacier in Spitsbergen, Cruttwell falls in Venezuela, Mount Cruttwell in the Pamirs, Cruttwell’s Leap in Cumberland marked his travels; Cruttwell’s Folly, a waterless and indefensible camp near Salonika, was notorious to all who had served with him in the war. The shop paid him six hundred a year and commission, out of which, by contract, he had to find his annual subscription to the R.G.S. and the electric treatment which maintained the leathery tan of his complexion.

Before either had spoken, the General sized William up; in any other department, he would have been recognised as a sucker; here, among the trappings of high adventure, he was, more gallantly, a greenhorn.

‘Your first visit to Ishmaelia, eh? Then perhaps I can be of some help to you. As no doubt you know, I was there in ’97 with poor “Sprat” Larkin…’.

The General’s manner changed abruptly. His leg had been pulled before, often. Only last week there had been an idiotic young fellow dressed up as a missionary…

‘What the devil for?’ he asked tartly.

‘Oh, just for my dispatches, you know.’

It was with exactly such an expression of simplicity that the joker had asked for a tiffin gun, a set of chota pegs and a chota mallet. ‘Miss Barton will see to you,’ he said, and turning on his heel began to inspect a newly-arrived consignment of rhinocerous hide whips in a menacing way.

Miss Barton was easier to deal with. ‘We can have some cloven for you,’ she said brightly. ‘If you will make your selection I will send them down to our cleaver.’

William, hesitating between polo sticks and hockey sticks, chose six of each. Then Miss Barton led him through the departments of the enormous store. By the time she had finished with him, William had acquired a well-, perhaps over-furnished tent, three months’ rations, a collapsible canoe, a jointed flagstaff and Union Jack, a hand-pump and sterilizing plant, an astrolabe, six suits of tropical linen and a sou’wester, a camp operating table and set of surgical instruments, a portable humidor, guaranteed to preserve cigars in condition in the Red Sea, and a Christmas hamper complete with Santa Claus costume and a tripod mistletoe stand, and a cane for whacking snakes. Only anxiety about the time brought an end to his marketing. At the last moment he added a coil of rope and a sheet of tin; then he left under the baleful glare of General Cruttwell.

And here’s Deedes, describing his:

“At Austin Reed in Regent Street, where Ellis [Mervyn Ellis, the Morning Post’s news editor] and I made most of our purchases, the notion of preparing me for an extended siege was greeted with enthusiasm. We were persuaded to buy, among other things: three tropical suits, riding breeches for winter and summer, bush shirts, a sola topi, a double-brimmed sun hat, a camp bed and sleeping bag, and long boots to deter mosquitoes at sundown. To contain some of these purchases we bought two large metal uniform cases and a heavy trunk made of cedar wood and lined with zinc to keep ants at bay…

At the Army and Navy Stores in Victoria Street, we found a department that specialized in kitting out those bound for the tropics. They knew where Abyssinia was and could suggest the right medicines for the region. These included bottles of quinine pills which were then reckoned to be the best protection against malaria. The Army and Navy also produced slabs of highly nutritious black chocolate — an iron ration for emergencies to go inside the zinc-lined trunk. Our purchases in all weighed just under 600 pounds — a quarter of a ton.”

I prefer Waugh’s version. You can tell that this all took place before the invention of RyanAir — who now impose a strict 10kg limit on cabin baggage and 15kg on anything that’s going in the hold.