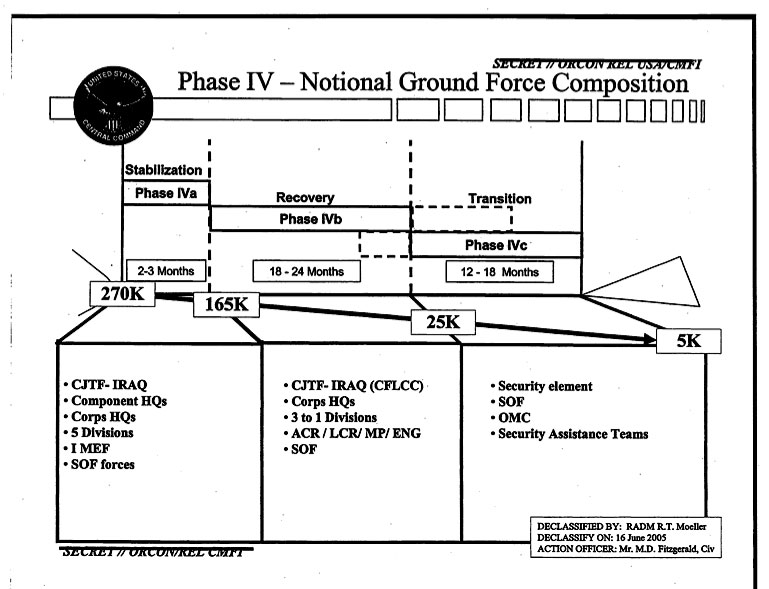 This is a PowerPoint slide from a White House briefing by General Tommy Hanks in August 2002 explaining how post-Saddam Iraq would be managed in a series of orderly stages (‘Stabilization’, ‘Recovery’, ‘Transition’) which would require only 5,000 US troops in country by 2006. The presentation was obtained by George Washington University’s National Security Archive under the Freedom of Information Act. It makes one wonder what these guys were smoking.

August 2002 was an important time for developing the strategy. President Bush had yet to go to the United Nations to declare Saddam Hussein’s supposed weapons programs a menace to international security, but the war planning was well under way. The tumultuous upheaval that would follow the toppling of the Hussein government was known antiseptically in planning sessions as “Phase IV.” As is clear from the slides, it was the least defined part of the strategy.

General Franks had told his officers that it was his supposition that the State Department would have the primary responsibility for rebuilding Iraq’s political institutions.

“D.O.S. will promote creation of a broad-based, credible provisional government — prior to D-Day,” noted a slide on “key planning assumptions.” That was military jargon for the notion that the Department of State would assemble a viable Iraqi governing coalition before the invasion even began.