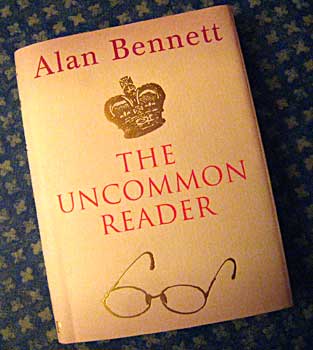 Every Christmas there’s a book which takes the UK market by storm. It’s the book that everyone thinks someone else would like to read — the perfect literary stocking-filler. In earlier years it was Lynne Truss’s Eats Shoots and Leaves and Schott’s Miscellany.

I’ve just finished what I predict will be this year’s Christmas Book. It’s Alan Bennett’s delicious fantasy about what would happen if HM the Queen became a serious reader. Here she is explaining Proust to the (baffled) Foreign Secretary:

“Terrible life, poor man. A martyr to asthma, apparently, and really someone to whom one would have wanted to say, ‘Oh do pull your socks up.’ But literature’s full of those. The curious thing about his was that when he dipped his cake into his tea (disgusting habit) the whole of his past life came back to him. Well, I tried it and it had no effect on me at all. The real treat when I was a child was Fuller’s cakes. I suppose it might work with me if I were to taste one of them, but of course they’ve long since gone out of business, so no memories there. Are we finished?”. She reached for her book.

124 pages of pure, unadulterated bliss. If I were a screenwriter I’d be working on the adaptation now.