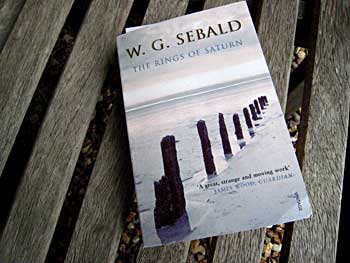 I’m reading a truly extraordinary book. It’s the record of a journey on foot through a part of the world that I love – the coast of East Anglia from Suffolk to Norfolk. The author is a German academic who settled in Britain (and taught at the University of East Anglia). He died in 2001.

As he walks through this landscape, Sebald takes his reader on entrancing, serendipitous digressions through history and literature. In Lowestoft, for example, he is reminded of Joseph Conrad, and there then follows an absorbing meditation on Conrad’s life and the experiences which led to The Heart of Darkness — and thence to an equally absorbing digression into the life and death of Roger Casement. (The common link, of course, is the Congo and the brutality of Belgian colonialism which so shocked and horrified both men.) I’m continually astonished by the extent of Sebald’s erudition: his is the best-stocked mind I have ever encountered, with the possible exception of Frank Kermode’s.

I’ve just reached the point where Sebald arrives in Dunwich, a village with an intriguing history.

The Dunwich of the present day is what remains of what was one of the most important ports of Europe in the Middle Ages. There were more than fifty churches, monasteries and convents, and hospitals here; there were shipyards and fortifications and a fisheries and merchant fleet of eighty vessels; and there were dozens of windmills… The parish churches of St James, St Leonard, St Martin, St Bartholomew, St Michael, St Patrick, St Mary, St John, St Peter, St Nicholas and St Felix, one after the other, toppled down the steadily-receding cliff-face and sank in the depths, along with the earth and stone of which the town had been built. All that survived, strange to say, were the walled well-shafts, which, for centuries, freed of what had once enclosed them, rose aloft like the chimney stacks of some subterranean smithy, as various chronicles report, until in due course these symbols of the vanished town also fell down.

Moving on from Dunwich, he meditates on the fact that most of the countryside inland from the coast was once forest, and on the way industrialisation and agriculture gradually deforested Britain – and on how this ‘progress’ is currently being re-enacted in Latin America and the tropics generally.

It is not for nothing that Brazil owes its name to the French word for charcoal. Our spread over the earth was fuelled by reducing the higher species of vegetation to charcoal, by incessantly burning whatever would burn. From the first smouldering taper to the elegant lanterns whose light reverberated around eighteenth-century courtyards and from the mild radiance of these lanterns to the unearthly glow of the sodium lamps that line the Belgian motorways, it has all been combustion. Combustion is the hidden principle behind every artefact we create. The making of a fish-hook, manufacture of a china cup, or production of a television programme, all depend on the same process of combustion. Like our bodies and like our desires, the machines we have devised are possessed of a heart which is slowly reduced to embers…

The only problem with this entrancing book is that it has to come to an end — on page 296. Still, I’m only on page 170 at the moment.