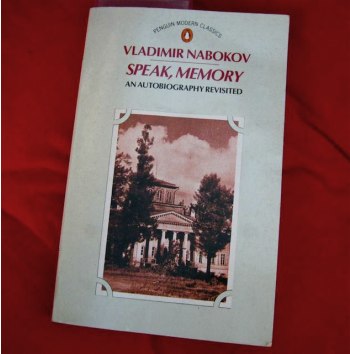 I’m re-reading (after a gap of perhaps 20 years), Vladimir Nabokov’s autobiography. I’d forgotten how good it is: simply ravishing. I keep annoying my companions by reading passages to them. Passages like this description of his Swiss governess:

A large woman, a very stout woman, Mademoiselle rolled into our existence in December 1905 when I was six and my brother five. There she is. I see so plainly her abundant dark hair, brushed up high and covertly graying; the three wrinkles on her austere forehead; her beetling brows; the steely eyes behind the black-rimmed pince-nez; that vestigial mustache; that blotchy complexion, which in moments of wrath develops an additional flush in the region of the third, and amplest, chin so regally spread over the frilled mountain of her blouse. And now she sits down, or rather she tackles the job of sitting down, the jelly of her jowl quaking, her prodigious posterior, with the three buttons on the side, lowering itself warily; then, at the last second, she surrenders her bulk to the wicker armchair, which, out of sheer fright, bursts into a salvo of crackling.

Watching Nabokov handling the English language is like watching a Rostropovich handling a cello; effortless mastery. I think I have a pretty wide vocabulary, but I’m being driven to consult dictionaries just to check that he isn’t having me on. Page 28, for instance, required three separate checks — of ‘fatidic’, ‘hypnagogic’ and ‘palpebral’. Speak Memory! isn’t for speed readers. But if you like seeing a genius at the top of his game, it’s a delight.