One of the projects I’ve been working on for a while came to fruition last night with the launch of the Adelphi Charter. Or, to give it its full name, the Adelphi Charter on Creativity, Innovation and Intellectual Property. It’s an attempt for formulate a sane set of principles to guide law-making on IP in a digital age, and the project was hosted and sponsored by the Royal Society of Arts, which has a 200-year record of concern about intellectual property issues. I was a member of the international Commission which drafted the document. 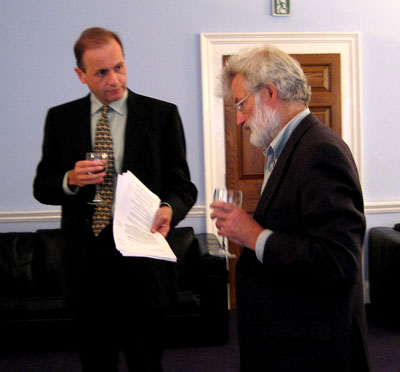 The Charter was launched at a crowded event at the RSA, during which two of my fellow Commission members, James Boyle (on the left) and John Sulston, gave memorable speeches.

John led the team which decoded the human genome in order to ensure that it remained in the public domain, and in the process put the whole of humanity in his debt (a debt only partly repaid by his being awarded the 2002 Nobel Prize for medicine). At one point in his talk, he invited us to contemplate what would have happened if he’d failed — if the genome (which, after all, is “the book of life”) had been copyrighted by a commercial company. Anyone who wanted to read the book would, firstly, have had to pay a fee, and secondly (and more importantly) would not be able to reveal what they’d discovered as a result of reading it. It would, he said be “like reading a book review and going to a bookshop to buy a copy and being told by the bookseller ‘No — you can’t see it'”.

In his opening declaration, John Howkins, who chaired the Commission, reminded people that the publication of the Charter was, in a way, only the end of the beginning. The real work lies ahead — in persuading governments and the public that we have to think again about the way we grant and regulate intellectual property rights.

Being a member of the Commission has been an exhilarating experience because it brought me into contact with such a range of formidable people — ranging from thinkers like James Boyle, John Sulston, Larry Lessig and Jamie Love, to activists like Cory Doctorow and artists like Gilberto Gil, the remarkable musician who is also Brazil’s Minister of Culture. 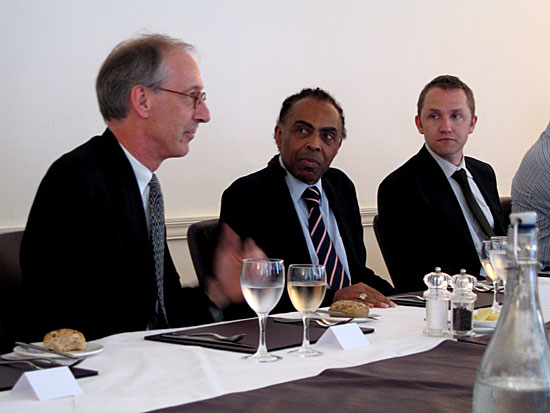 Gilberto could not be present at the launch (he was in Paris on government business), but on Tuesday he came to the RSA for lunch — as did James Purnell, the UK ‘Minister for the Creative Industries’ (shown here on the right of the picture. John Howkins is on the left.)