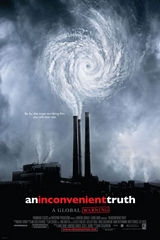 The kids and I went to see Al Gore’s film, An Inconvenient Truth this evening. It was — as one review put it — “a deluxe filmed version of the ‘slide show’ Gore has been presenting and refining since 1978, in which he concisely lays out the case that our carbon-dioxide emissions trapped in the Earth’s atmosphere are systematically destroying the environment”. I had seen a version of the slide show some time ago, so the content of the film was not a surprise to me — though it was eye-opening for the kids. I came away with a few thoughts: