The phrase “it isn’t rocket science” has become such a cliche that I eventually began to wonder what it meant. What is rocket science? And is it really so difficult?

The answer to the first question was provided by my esteemed colleague Tony Nixon, who is a physicist and knows about these things. “Wait here”, he said, and reappeared a few minutes later brandishing his copy of Space Dynamics, Volume 1 by Prof. Ir. Dr. J.M.J. Kooy, opened at the page which gives the equations for “powered flight of rocket through terrestrial atmosphere with prescribed thrust direction as a function of time, considered as a system of reference rotating with the earth”. So here, in summary form, is the central piece of knowledge of ‘rocket science’. 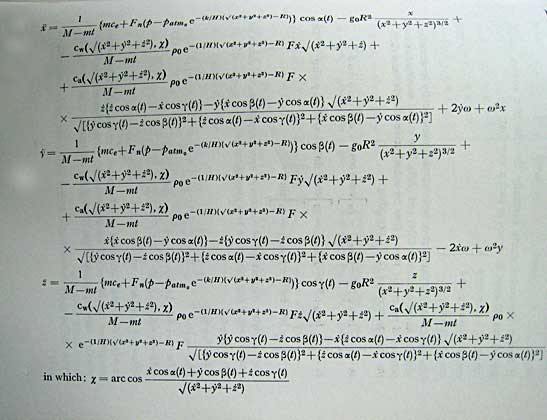 Nothing to it, eh? Wouldn’t it be nice if everything could be summarised so succinctly.