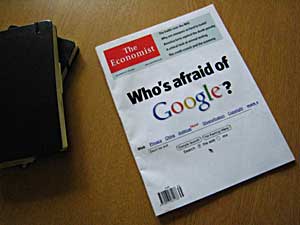 This may seem a strange image with which to illustrate a post on the Microsoft judgment, but bear with me. As my mother used to say when confiscating pocket-money for some misdemeanour, “it isn’t the money, it’s the principle”. I can’t imagine that even a $613 million fine will make much of a dent in a company that has a market cap of $300 billion and is sitting on nearly $50 billion in cash and marketable securities.

I can’t even get worked up about seeing Microsoft finally coming unstuck (though it couldn’t have happened to a nicer company), because in a way the caravan has moved on. The company’s monopoly hold on the PC desktop is still a reality, of course, but it’s a wasting asset in a networked world. The most interesting implication of the European court’s decision is what it might mean for other companies — Apple and Google, to name but two. Just as sharks are encouraged by the sight of blood, the sweeping legal success regulators have enjoyed in the Microsoft case may have whetted their appetite for more. Apple’s grip on the music-download market provides one obvious target (especially in view of the widespread European concern for ‘interoperability’). And Google’s stranglehold on “all the world’s information” will eventually put it squarely in the crosshairs of the European regulatory system. Stay tuned.

The text of the Court of First Instance judgment is here, btw.

More: I forgot to mention Intel as another possible target for Euro-regulators. And this week the European Commission is opening hearings on a complaint that the iTunes store violates competition rules by charging Britons more than other Europeans for downloads.