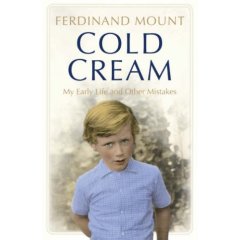 I’m reading — and enjoying — Ferdinand Mount’s autobiography, Cold Cream: My Early Life and Other Mistakes. But I’m not entirely convinced by the amusing presentation of his earlier self as a hapless, asthmathic, shy, testosterone-deficient, bookish, hopeless-with-girls adolescent. As portrayed, he seems ‘wet enough to shoot snipe off’, as the phrase goes. It’s also difficult to square this picture with his later success as speechwriter and spiritual mentor to Margaret Thatcher, and Editor of the Times Literary Supplement (prop. Rupert Murdoch). These are not arenas in which hapless, shy etc. people generally thrive.

He’s very good on late-1950s Oxford, though. He started by studying PPE (Politics, Philosophy and Economics) but found himself out of his depth and switched to Modern Languages (German and French) after four terms. (One of the great blessings of Oxford and Cambridge at that time was that one was allowed to make dramatic changes of course like that. I’m not sure if it’s allowed any longer.)

The curious thing is that, looking back today, I realise that during that brief period of intermittent attention I picked up, almost unwittingly, half the mental furniture that, scratched and battered no doubt, I still use. From the elementary economics that did stick in my head, I more or less grasped the basic laws of supply and demand. No doubt I could have picked them up quickly enough if I had ever helped run a fruit and veg stall, but my rarefied upbringing had left me a commercial innocent. Them from the voluble torrents of Isaiah Berlin’s lectures on political ideas, I picked up the insight, which amazingly seems to have evaded scholars for several millennia, that political principles my be equally admirable and yet conflict with one another and there is nothing we can do about this excelt live by making untidy compromises and trade-offs between the.

Above all, from J.L. Austin, that astringent philosopher with his unforgettable rasping voice and unforced wit, I understood that philosophical problems are very often invented by philosophers themselves. From Plato to Ayer, their warped jargon and their crude and dishonest assumptions have time and again prevented them from seeing that ordinary language copes pretty well with reality and enables us to say most of what we want to say. Far from being trivial, this ‘ordinary-language philosophy’ cleared the trivial out of the way, leaving us free to talk directly about the serious things.

Mount brilliantly evokes the atmosphere of Austin’s lectures, which were

so crowded that when he came in he had to pick his way through a black sea of gowned undergraduates. He was listened to with an intentness I can never remember being part of before or since. Although his asides were very funny, we did not dare to laugh too expansively for fear we might miss a beat in the argument and when he finished and strode abruptly out of the room the hush remained unbroken for a moment or two as though we had been holding our breath the whole hour and had forgotten how to breathe out.

“Although we did not know it”, he continues,

what we were living through was the twilight of the Oxford don. this was the last period in which the same English university contained such a line-up of spellbinding lecturers, and the last period too when university lecturers enjoyed a decent professional standard of living. More important, there was an intimacy then between teachers and students which has since dimmed, for reasons I do not quite understand.

If there’s an elegaic quality about this it’s because universities are not like this any more. It’s not just because even Oxbridge undergraduates no longer wear gowns (except to Formal Hall), but because teaching has become downgraded in virtually all ‘world-class’ universities as they transformed themselves into institutions that are ranked primarily on their research. The thing that is interesting about Oxford and Cambridge is that — almost uniquely among leading universities — they still strive to pay attention to the teaching of undergraduates. But even they they are finding it an increasingly difficult struggle. I have heard it said, for example, that Cambridge ‘loses’ something like £7,000 a year on every undergraduate — in the sense that that is the gap between what it costs to give Oxbridge-type intensive tuition and what the state-funded fee provides.